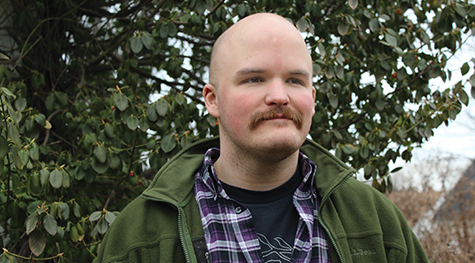 The resurrection of Brian Dickens is upon us.

The acoustically focused singer/songwriter has released a new album – Posterity Measures – which he describes as having more “oomph” than his previous two efforts, but that reviving bolt of energy didn’t come until he went through a life-altering experience.

Although he was born and raised in Winchendon, the 26-year-old Dickens spent much of his childhood venturing to Worcester.

“Worcester was my Boston for a long time,” Dickens said. “Music is what brought me to Worcester. Going and seeing music there.”

He got his start playing solo acoustic sets with his guitar as a 14-year-old, when he had his father take him to Tammany Hall. Since then, he has performed at Beatnik’s and The Raven, as well as toured across the country.

Those gigs and years of traveling ultimately led to an unexpected chain of events that resulted in Posterity Measures, a collection of songs that Dickens is excited about.

The album, recorded in New Hampshire at producer Ben Rogers’ Loud Sun Studio in 2017, followed a tumultuous year for Dickens that landed him in the hospital and questioning life.

In the summer of 2016, Dickens had a tour along the east coast canceled on him. He returned home to “work with what he had” – living with his father, who was never home, and just being by himself and doing nothing, he said.

So, Dickens decided to take in a pet rat named Bonnie (a sketch of her is featured front and center on the album cover) but was eventually left heartbroken.

“She died very suddenly, and this is the first animal that ever died with me, and it hit me really hard,” he said.

A few days later, Dickens said he attended a party and “got dosed with something willingly that was going to be a little bit of something, and it ended up being a whole lot of disaster.”

The regretfully haphazard use of a psychedelic, as Dickens described it, landed him in the hospital for four days.

“It was thorough over-stimulation in every angle and in every meaning of ‘too much truth,’’’ he said. “I knew too many answers to work with, too many doors opened that I couldn’t close.”

To make matters worse, during his stay in the hospital, his grandmother passed away. Dickens believes the experience made him a different person and that what remained with him after was “what I can do, and one of the few things I’ve ever been good at is writing damn songs and telling stories because stories can outlive you absolutely,” he said. “Everything became too real too quick, and I had to make sense of things or suffer, so I made the music.”

Those songs became Posterity Measures, an acoustic/folk/rock hybrid that is Dickens’ heart on his sleeve and attempt to leave no stone unturned. The album crackles and spins with a zest that mirrors the enthusiasm of the artist who made it.

“Brian is a really high-energy guy, which is cool,” said Rogers, who also played drums on the album. “One of the things that stood out to me working with Brian was that he moved quickly and he was decisive. He had a clear vision of the project.”

Posterity Measures is Dickens’ second album with a backing band and third overall. (His debut album was a solo acoustic effort.) Although he appreciates the music he made before, he didn’t want to repeat it.

“I like these songs, but I’m not going to keep doing this,” Dickens said of his mindset before recording the new album. “I keep putting out acoustic music of just me and the guitar, and you have to turn your volume up.”

You don’t have to turn the volume up very high to hear that Dickens means business on his third go-round. Songs like “Concussion” touch upon the fragile nature of one’s mind and memory, while “In the Living Room” looks at the simultaneous wonder and fear of all things in life.

It’s obvious when speaking with Dickens that he has a new appreciation for living and a new way of looking at things, and it carries over into Posterity Measures, where the lyrics are the central focus.

“(He’s) a thoughtful songwriter,” said Rogers. “He puts a lot of thought and work into his lyrics. His songs are pretty dense lyrically, so that’s a little different. He’s got a lot to say, and it’s a good way to express it.”

There’s certainly no shortage of lyrics in Dickens’ new material, and the overall feeling that you get when listening to it can be both uplifting and haunting. There’s love, but also anger – optimism with pessimism.

“Sitting in the living room dying and crying all about all the things for which I always sing/for the love of my family and my efforts to figure out myself eventually!” Dickens sings in “In the Living Room.” “For the wonder and magic in every cloud/and the restless worms chilling out in the ground/who will manipulate my matter once I’ve tired it out/what will free me to God, and how I’m free from all that for now.”

Posterity Measures is about finding and having a purpose in life, something Dickens said he lacked before the events leading to its recording.

“If we can’t live forever, at least we can have purpose,” he said.

For Dickens, Posterity Measures resembles a type of time capsule that he has created to mark a turning point in his journey.

Dickens certainly seems thankful for where he currently is, and he’s looking to take his momentum into 2019. He has eight other “solid” songs he would like to release next year and also has a show booked at Beatnik’s on Friday, Jan. 4.

“Things are on the up and up, and this will not be my last record,” he said. “I’m cooking (another) one up already.”