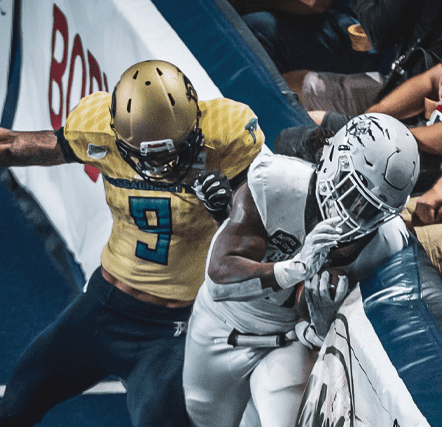 Living in New England, especially in the last two decades or so, people have come to expect that the teams they love will automatically be a dynasty. The Red Sox, after their drought, are a contender each year. The Celtics have the second most championships in NBA history. The Patriots, well we don’t even have to go there do we?

After the Massachusetts Pirates, an arena football team that plays in Worcester at the DCU Center each Spring and Summer in the Independent Football League, won a championship last year, I’m sure this fine city and their fans expected this to be a regular thing. Especially when you consider the roster, coaching staff, management and utility staff that work out on the field and behind the scenes. However, you can build a well oiled machine and even that can still break down.

The defending champs, The Pirates, despite all that didn’t even have that disappointing of a season. They still finished 11-5, made the playoffs for their fourth season in a row and lost by one point in the opening round of the playoffs. That alone, would suffice. But consider this, the team had 22 injuries (including 3 players who only played the first game of the year and had season ending injuries), 3 different quarterbacks, and 3 of their five losses were determined in the finals minutes of their respective games. “It’s honestly amazing what Jawad (Yatim) did this year,” says Jake Ignaszewski, Director of Communications at the Pirates. And for a team that carries 30 players, suits up 25 each game and has 22 specific injuries, yeah it is pretty amazing.

Pirates Quarterback Taz Wilson was actually signed 2 days before week 13 and had to learn the offense quickly. Even for a fast paced game like arena football that would be pretty overwhelming for anyone. Ignaszewski says that Wilson took it in stride, “it was fantastic to see Taz adapt so quickly and really understand the whole offense by the second game.”

The Pirates, despite their hardship, also had some other stellar performances throughout the season. Thomas Owens a Wide Receiver who in college played at Florida International University and was an invitee to the Seattle Seahawks training camp before ultimately signing with the Pirates in 2019. Owens led the league in receiving yards with 899, was second in receptions (67) and touchdowns (21) and even finished third in yards per game with 58.5. He was selected to the All-IFL’s 1st team as well as defensive back Aarion Maxey-Penton, an alumna of the University of Missouri. Maxey-Penton led the league in interceptions with two of those being returned for touchdowns. According to the Pirates, these two players “helped propel them to the playoffs.”

For the All-IFL’s 2nd team, defensive lineman Da’Sean Downey and offensive lineman Roubbens Joseph were named. Downey, a 6’4”, 240 lb UMass Amherst alumni, recorded 30 tackles this year (13 solo and 17 assisted), had 5 QB sacks, and even recovered a fumble that was returned for a touchdown. Joseph graduated from the University of Buffalo and is also 6’4” but weighs in at 320 lb. Joseph was a part of an offense that was ranked fourth in the league, only allowed 15 sacks all season and that averaged almost 42 points a game.

Ignaszewski says that part of the reason this team was able to right the ship this whole year, were the mid-season signings finding quarterbacks last minute, like Wilson and also the steady leadership and adaptability of head coach Rayshaun Kizer and his coaching staff.

Ultimately the Pirates were upset in the first round of the playoffs, by the 3rd seed in the Eastern Conference, the Quad City Steamwheelers. They lost 39-38 in overtime thanks to a missed extra point attempt by the Pirates kicker Josh Gable (who led the league in FG percentage this season). The team is already looking to next season and bounce back from their tough postseason loss.

Fans can still expect the fast gameplay, high scoring and fan interaction Worcester has come to love. “You’ll see our players going right up to fans, signing autographs after a stoppage, playing rock, paper, scissors with them and ultimately giving them a stellar show,” says Ignaszewski. Here’s to looking forward to that, as the Massachusetts Pirates defend their ship.