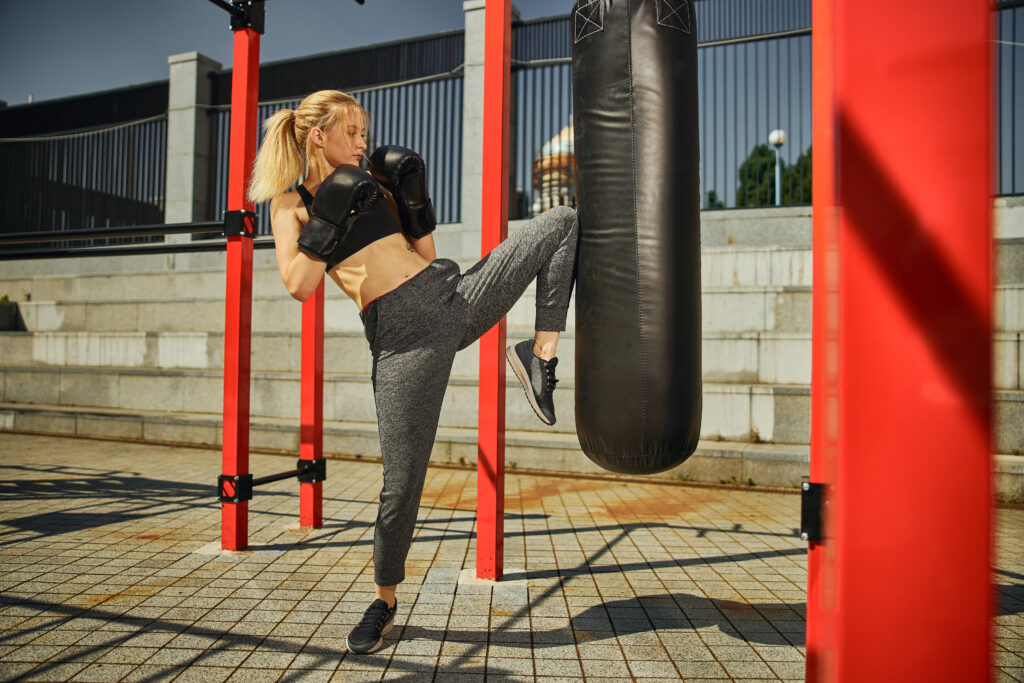 Chances are you spent the winter huddled up inside, enjoying hot chocolate and comfort foods. But now it’s time to get back out and stretch. If you want to get in shape, feel healthy and look good this summer, there are some fun and interesting offerings in and around Worcester that can help. From hot power yoga to the latest in workout technology, there is something for everyone that will fit any kind of schedule. So, shake off those winter blues and let’s get to it!

What better way to loosen those stiff muscles than hot yoga? And how about not just any hot yoga, but hot power yoga that is a whole workout in and of itself. That’s what Kristin Caforio-Marengo, owner of the Hot Yoga Power Center on Grafton Street, is practicing and teaching her students. Since 2014, Caforio-Marengo has been turning up the heat—literally to 99 degrees—in her yoga studio for a Vinyasa-style yoga workout that goes beyond just stretching.

“It does great things for not just flexibility, but it has a lot of strengthening purposes too,” Caforio-Marengo explains, “It’s a perfect blend of relaxation and activation.”

Vinyasa yoga links breath to movement in which you follow particular breathing techniques while hitting poses in a seamless fashion, flowing from one to the other.

“It’s really great for relieving stress, anxiety or any built up energy of any kind,” she says.

The workout includes side-bends, back-bends, arm balances and more in what Caforio-Marengo describes as a “well-rounded practice for the entire body.”

Alana D’Ambrosio is a frequent customer of Hot Power Yoga Center and says there is nothing else like it in Worcester.

“It’s intense,” she says. “It kicks my butt every time I go in but that’s why I like it. You don’t need to know much going into it.”

Not only is the Hot Power Yoga Center welcoming to novices, it also offers different types of classes. An aroma class adds oil diffusers in the room to help lift your spirit, and a night class that Caforio-Marengo calls “super relaxing” creates a nice ambience with candles. An online class is also offered.

Perhaps the most unique workout you can sign up for is based on Pink Floyd’s “Dark Side of the Moon” album, in which the class is taught along to the record playing on a night when there is a full moon. The flow of the workout is synced to the beat of the music for a “moving meditation (that) takes you into a real nice escape.”

We’re going to kick it up another notch now with iLoveKickboxing over in West Boylston, where owner Joe Formosa emphasizes “fun.” Kickboxing can be intimidating, but you don’t have to worry about any Jean-Claude Van Damme wannabes flying through the air here.

“We like to say that you get all the fun of kickboxing but there’s no fight,” says Formosa. “Nobody is here to hurt you.”

Formosa and his instructors focus on helping their clients “build a healthy body” rather than fight with each other. “We don’t engage in any of that, which helps keep it in a lighter spirit,” he says about sparring with each other, “But the moves and the combos are the same.”

There are 29 heavy bags set up at the iLoveKickboxing studio for classes that include eight rounds of bag work that last two-and-half minutes each. You may start with a simple jab and cross combo, and then add more maneuvers like a roundhouse kick with each advancing round.

Students can use the iLoveKickboxing’s app to get daily and monthly reports of their progress and compete with others in iLoveKickboxing studios around the country to see who has burned off the most calories through a point system.

“It’s trying to get it so people realize that fitness happens throughout the day,” says Formosa. “The more you’re thinking about healthy choices and fitness, the more successful you’re going to be.”

So, you’re a gym rat who wants to get to the bread and butter of working out on your own schedule and without the crowd? There’s no better place to do that than at the Anytime Fitness on Shrewsbury Street, says franchise owner Gary Riello.

“I love it,” says Riello. “My whole life I’ve wanted to help people and that’s why I got into this business.”

Like all Anytime Fitnesses, the one on Shrewsbury Street is open 24/7 and has a “more personalized experience” with its smaller size and fewer members.

Workout classes with a high number of people aren’t offered, but personal and small group training of up to four people is.

“I like to focus on individuals,” Riello says. “If you have two or three people working out together, you can pay attention to each one as opposed to being just a number in a class.”

While Shrewsbury Street’s Anytime Fitness is “outfitted to cover the whole dynamic of the industry,” there is one part of Reillo’s gym that has become increasingly popular: the “purple turf room.”

“That changed my gym,” Riello says about the room’s popularity after he added it.

The room features material similar to the kind used on a football field and is designed for indoor sport and agility use. HIIT workouts–quick, full-body circuits–are what Riello sees most people doing in the room, plus stretching.

“I think that has become more known as opposed to just coming in and lifting weights,” Riello says.

The choices we have for home workout equipment are constantly evolving, but one trend that is here to stay is Peloton. Not only can you get a good workout on a bike through Peloton, this year the company will be offering a new strength training program called Peloton Guide that includes weights and technology to help you track and improve your form.

Reginald McGee, a mathematics professor at Holy Cross, has a busy schedule that can make going to the gym difficult. He decided to give the Peloton bike a try in June of 2021, and has been riding ever since. He has also incorporated the program’s yoga workout into his routine.

McGee has noticed a difference since starting, too. He says he started using Peloton because he was looking at something to get his weight down and has since been “feeling a lot better and noticing changes in (his) body.”

“I’ve been more focused on just feeling a lot better and I’m sleeping a lot better,” he says. “I’m definitely noticing gains in the class on personal records.”

And the amount of control you’re given with Peloton’s on-demand library of classes is perfect for someone who doesn’t have the time to sit through exercises that they’re not interested in.

“Knowing that I can search for a ten-minute high intensity interval training ride, a fifteen-minute slow yoga flow, five-minute core workout with a great playlist, ninety-minute power zone ride, et cetera definitely keeps me from falling into the ‘I don’t have time’ trap that I’ve fallen into many times in the past when I’ve been busy with work,” McGee says.

If you’re concerned about being too isolated and still want human interaction, McGee says the Peloton community is “awesome.”

“I’ve moved around a lot and have friends around the country who have them,” he says. “You hop on the bike and take a class together. If you want, you can video chat with each other during the class.”

Whether you feel more comfortable working out at home or at a gym, now is the time to invest in your health. Find a workout routine that is best for you and take that first step to improving or maintaining your physical fitness. Excuses not accepted!