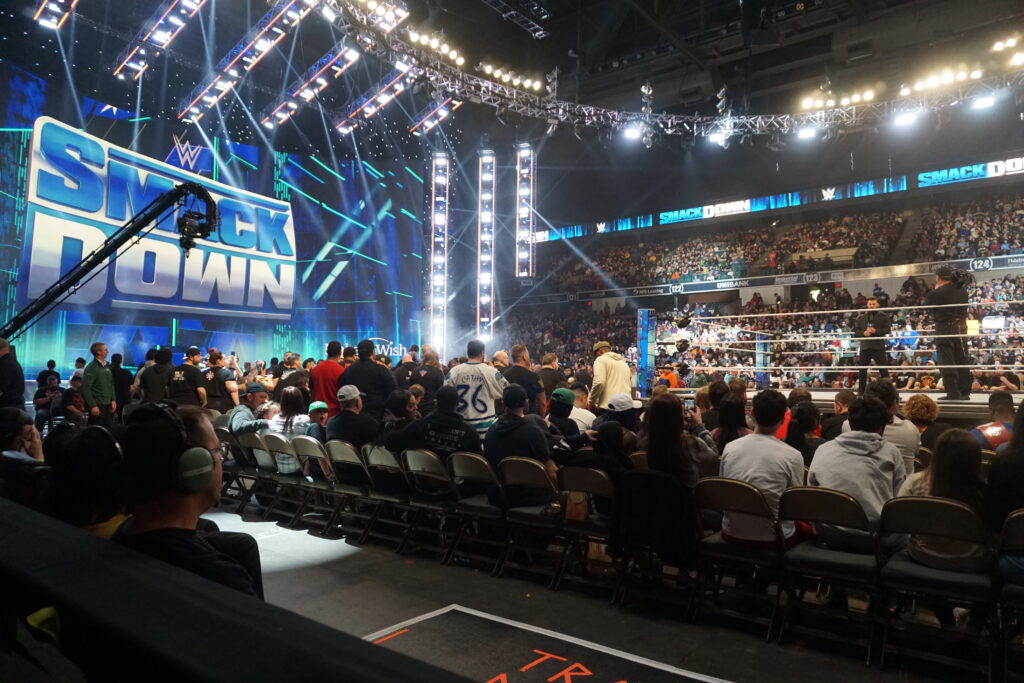 Smackdown returned to the DCU Friday night for the first time since July 2019, and Worcester was feeling it! The show began with a bang when “I HEAR VOICES IN MY HEAD” dropped and RK-Bro cut a promo on the Usos. Matt Riddle gave a brief history lesson on Worcester, making a point to clarify that Worcestershire sauce was not invented here. You learn something new every day. I saw Matt Riddle get thrown through a table at Electric Haze once, so I like to imagine he has a special place in his heart for our city.

Madcap Moss’ first match since the breakup with Happy Corbin was well received by the audience. I’m all for Madcap Moss as a babyface, but I’m a die-hard Corbin fan. I’m hoping their falling out will shift Corbin away from the Dan Flashes shirts (the pattern’s so complicated)  and back to the despondent, constantly dirty Sad Corbin who we all grew to love.

My man Sami Zayn came out to boos for his match against Drew McIntyre, which was crazy to me. I love Sami Zayn. His intro is catchy, he’s friends with Laura Jane Grace, and his humanitarian efforts are amazing. The feud between Drew and Sami continued with Sami running through the crowd to escape the Scottish Warrior. Adam Pearce has had enough of Sami Zayn’s antics and scheduled a lumberjack match for next week.

The show ended with a dark match between Seth Rollins and Cody Rhodes. Even though it was late, both wrestlers were met with a solid pop. Rollins and Rhodes are a great matchup, but I do wish Oxford’s own Damien Sandow would come back for a Rhodes Scholars reunion. Cody grabbed a mic when the match ended and thanked the crew for all their hard work. He promised to sign autographs and take pictures with fans for as long as he could. What a class act.

The DCU crushed it as always. Lines moved quickly, the staff was super helpful and friendly and our seats were amazing. WWE and the DCU make for a great pair, it’s the perfect venue for Smackdown. My only regret was missing out on buying a one-night-only “Worcester 3:16” shirt, but that was on me. It will obviously be a while, but I’m already looking forward to the next WWE event at the DCU.