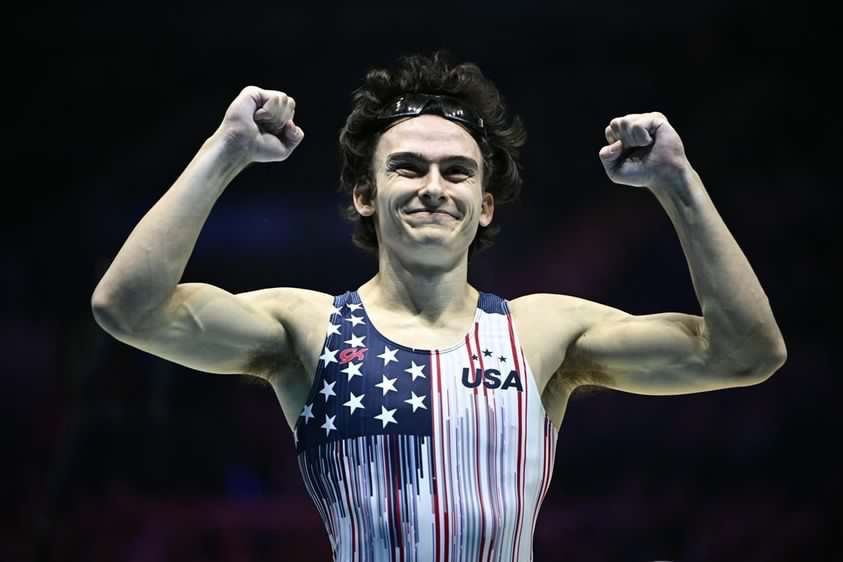 As we’ve touched upon before in this column, Worcester is a great sports town, even if  gymnastics isn’t always what comes to mind. However, one local gymnast could possibly change that thinking. Stephen Nedoroscik is a Worcester Tech. graduate, growing up on Indian Lake. He trained at the Sterling Academy of Gymnastics and eventually attended Penn State, where he won two gold medals and a silver for the Pommel Horse in the NCAA Championships. He has competed nationally and internationally winning medals every step of the way. Most recently earning golds in the 2022 U.S. Classic and the U.S. National Championships. I sat down to talk to Stephen about his career, an upbringing in Worcester and how that may have shaped his gymnastics career.

When did your love of gymnastics start?

I was always a natural gymnast. Walking at 9 months and running at 1 year. I started climbing around that age as well. Everything in the house was a thing to climb, so when I was 4 years old my parents decided to put me in a club gym program. The first day I was there I climbed a 15’ rope, and within the next few days I was invited to join the team.

Was it always the pommel horse?

It wasn’t always the Pommel Horse. For a long time Parallel Bars was my favorite and best event. It wasn’t until my sophomore year in high school where my Pommel Horse abilities quickly passed that of my Parallel Bars.

When did you know you may have a shot at being a World Champion?

As soon as I was named to the National Team many doors opened up for me. I knew my capabilities on the event but wasn’t sure how I would be scored internationally. After my first international assignment, Doha World Cup 2019, I realized I had serious potential internationally even though I didn’t compete the best.

Was it hard going to school and training at a world competition level?

It was definitely difficult to compete internationally and be a college student. Yet I was able to perform well in both aspects. So I suppose it was difficult but not impossible!

What made you go to Penn State? How did they find you?

I wasn’t a highly recruited athlete. I was only reached out by The Air Force Academy. I actually reached out to many schools myself and went on unofficial visits to Penn State, Ohio State, and The University of Illinois. My favorite gym was at Penn State. They had a great facility and the Pommel Horse was right at the window where anybody walking by could watch. Truly though, my decision didn’t come down to best facility, money, or academics. I decided to go to Penn State when I asked my club coach Bob Donahue “what school do you think would be best for me?” To which he replied “Penn State has always made great Pommel Horse guys” and from there I talked money with all the schools and by the end of it Penn State just stuck out to me because of what my coach said, so I committed!

How would you get more kids in Worcester interested in gymnastics?

I think to get more kids interested in Gymnastics they need exposure to the sport. In today’s age the only sports they see are mainstream sports. It’s unsurprising many of them will choose those mainstream sports. But if more people in Worcester knew they grew up in the same city as a World Champion, perhaps some parents with “monkey boys” would look into a gym in their vicinity.

What’s next for competition?

As I type these answers I am currently at the World Championships. My next competition will be the Winter Cup to requalify to the National Team.

Who are your biggest influences?

I’ve never had someone to call my greatest influence. I never watched gymnastics before college. I mostly just enjoyed doing the sport. Funny enough I didn’t even know about NCAA Gymnastics until my junior year of High School. For the most part I’m motivated by my upcoming opportunities and my opponents.

What’s your favorite place to eat in Worcester?

My favorite place to eat in Worcester is definitely Lou Rocs Diner. I’m huge into breakfast meals and Lou Rocs has amazing sausage and big serving sizes. Me and my girlfriend ate there 4 years ago and she still compares breakfast sausages to theirs.