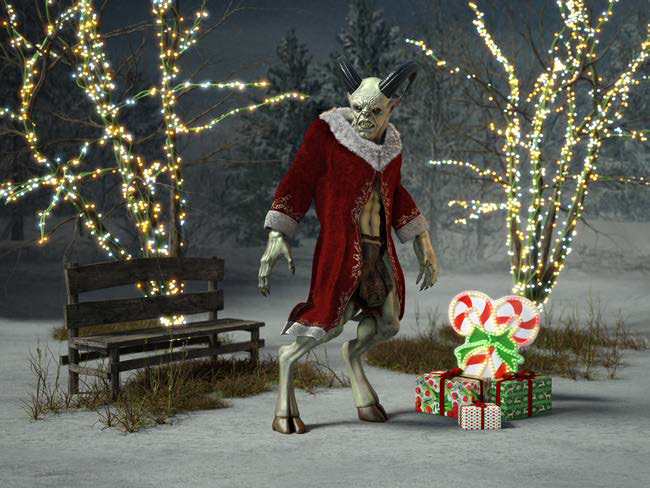 Krampus- when I was given the assignment to write the article, I knew that
somewhere along the line, I had heard that name. But was I ever in for a surprise
when I dug into it further.

Krampus is not who you want to meet in a dark alleyway when you are walking by
yourself. And he most assuredly is not the guy that any girl wants to take home to
meet her parents. But who is he, and what is it about him that makes people cringe,
shiver, and shake?

He is a mysterious creature who has sometimes been referred to as the antithesis of
Santa Claus. And while Santa is a jolly fellow who brings gifts to good little girls and
boys, Krampus is anything but jolly and nice.

His origins are based in Eastern European folklore, where he is described as a being
that is half man and half goat, with huge horns, claw-like hands, a long pointed
tongue, and fangs. He is also covered in brown or black hair. The origin of the name
is thought to have come from either a Bavarian word meaning dead or rotten, or a
German word meaning claw. Either way, he’s not a pleasant guy. His main purpose in
life is to scare children who misbehave.

Krampus has long been a part of the Christmas season in European countries, where
annual events such as parades and Krampuslauf (Krampus run) take place. These
events happen more often in Alpine towns and cities, with young men dressing up and
scaring the locals. In these areas, St. Nicholas is celebrated on his feast day of
December 6 th , while Krampus makes his appearance the day before, visiting homes
and businesses. St. Nicholas only deals with the good children, bringing them gifts,
while Krampus brings coal (perhaps a precursor to the reference of bad folks getting
only coal in their Christmas stockings).

He was virtually unknown in other parts of the world until Hollywood began to make
horror movies about him in the 1980’s. Krampus is thought to be based on early, pre-
Christianity pagan customs and traditions of the Alpine region, dating back to the 6 th
century, but no written documentation exists before the 16 th century. And while Saint
Nicholas is a benevolent and caring man who brings gifts to the children, Krampus
scares those who misbehave and as a result of the misbehavior, deemed unworthy of
gifts.

Krampus carries chains that he rattles, and also sometimes has bells of various pitches
attached to the chains. The chains are seen by some as a reference to the devil. And
entrenched in the pagan tradition, Krampus carries a rute- a bundle of birch sticks
that he sometimes uses to swat the children. In keeping with the theme of the devil,
Krampus sometimes wears a sack on his back- not filled with toys- but one that can be
used to carry away the naughty children.

In North America and other parts of the world, the movies have brought the story of
Krampus, along with some novels, and even an episode of American Dad and an
arcade video game in 1998 (CarnEvil) – a play on words for carnival?

Of course, the festivities of Krampus and the traditional Krampuslauf are not without
their troubles. Several times, those in attendance have taken revenge on Krampus for
the beatings with the birch sticks, and broken bones and outpatient hospital
treatments are not uncommon occurrences.

Whether good or bad, St. Nicholas or Krampus, it appears that the traditions are
deeply entrenched in Eastern European countries and now many other areas of the
world. And the festivals don’t seem to be fading in popularity- quite the opposite is
true. Will you be taking part in any of these festivities? Or will you pass on the idea?