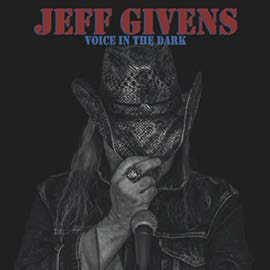 VOICE IN THE DARK
“Bourbon is hard to come by in my time of need”, sings Jeff Givens on “At the End of
My Rope,” one of many memorable songs on his album Voice in the Dark. This fun
and funky rock song swings with that familiar country twang we’ve come to except
from Givens. His rebellious debauchery returns on “Ride Cowboy Ride” and “Key
West,” but there is also an underlying heartfelt earnestness that makes Voice in the
Dark feel extra personal and meaningful.

Givens does an excellent job of tapping into what he’s seen and relaying it to the
listener on Voice in the Dark. “Long Goodbye” is a heart-aching account of someone
struggling with watching a loved one slip away to a disease, judging by the picture
Givens paints. The guitar phrasing and descending lick at the end is a melodic extension
of the hurt in the lyrics.

Voice in the Dark certainly isn’t a bummer, “Hello Darkness,” has a playful, bluesy
Tom Petty vibe that struts with Givens singing “I can’t ask for forgiveness/ I know it’s
wrong/I’m looking for redemption in every song”, but it can be real and raw, making
it feel like a complete, honest record.

Being alone in the dark is seen from different perspectives through the songs here,
whether it’s from that of a struggling musician, a person who lost a loved one, or
someone who finds themselves being left by a lover. That’s the theme that runs
through Alone in the Dark, and, although it can take many forms, the end result is
always the same. As he gives thanks for his own “sweet voice in the dark” on the title
track that helps him through, we can give thanks to Givens for the same.
For more, visit: jeffgivens.com

THIS IS IT (LIVE AT VINCENT’S)
Worcester-based musician Giuliano D’Orazio, who goes by simply as Giuliano, lets
it fly on his live album “This Is It (Live at Vincent’s).” Playing a mostly solo set with
the accompaniment of a couple guests, Giuliano does a fine job of making a series of
classic cover songs his own.

One of the first things you’ll notice about the record is the constant background
chatter of the audience. It really captures that “live” feel and makes the listener feel
like they’re in attendance. Armed with just his acoustic guitar and voice, Giuliano has
the ability to command your attention all on his own. His effortless segue into Tom
Petty’s “You Don’t Know How It Feels” is a standout as Giuliano delivers the lyrics
with feeling and empathy. He busts out a harmonica for his cover of Bruce Springsteen’s
“Promised Land.” It’s noticeable that Giuliano doesn’t try to sound like these
iconic singers, instead he delivers their well-known songs with his own character and
inflections.

Giuliano is joined on stage throughout the show by a trio of different musicians: Alison
McTavish, Joshua Croke, and Southside Tony, all of whom add an extra flare to
an already strong performance. Joshua Croke’s contribution on John Prine’s, “Angel
from Montgomery”, features a noteworthy electric guitar solo that nicely compliments
Giuliano’s acoustic playing. His “harmonica showdown” with Southside Tony
is another standout.

The crowd gets into it on Giuliano’s rendition of Radiohead’s “Creep,” when they
start singing along to what sounds like Giuliano’s surprise.
“This Is It (Live at Vincent’s)” is a showcase of a local performer at the top of his game
and really enjoying himself. The crowd in attendance sounds like they enjoyed it, and
you will too.