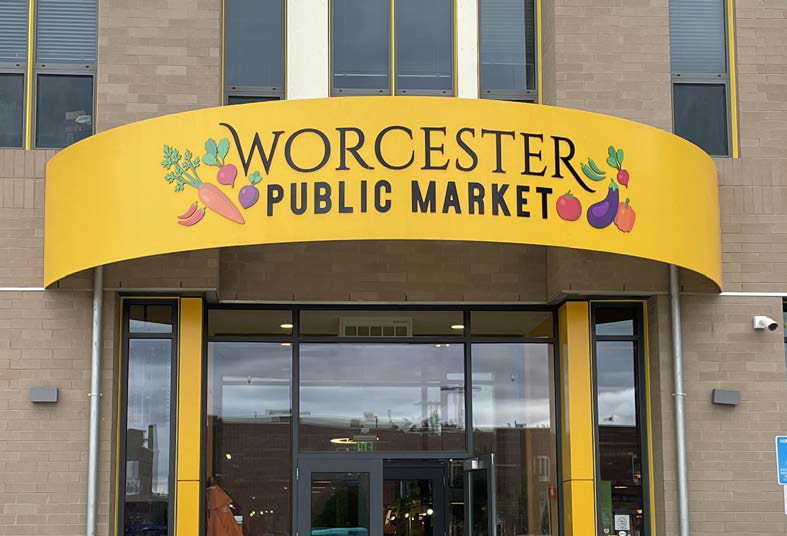 Decades ago, soon after I arrived in Worcester, a native I met asserted, “Whatever cuisine you’re interested in, you can find it here!” It was a proud boast from a true-blue Worcesterite who knew the city intimately.

The Worcester Public Market has the energy of the city’s indie culture, diverse cuisines and a local brewery all united under one roof at the town’s center of gravity, facing Kelly Square around the corner from Polar Park.

The goal of this trip was a relaxed-paced meal that sampled several vendors. Each of these vendors are welcoming and have incorporated their unique spirit into their space. Some, like One Love Café, are familiar; others have a newbie entrepreneurial vibe.

A recent arrival to the WPM, Atlantis Raw Bar, was our first stop. We took a couple places at the bar and asked for oysters. Nate, our server, presented a handwritten list of four options, half East Coast, half Pacific Northwest. He expressed regret that they don’t have a printed list, but I’d much rather have market-fresh than standardized inventory.

Our sampling, fresh oysters from Martha’s Vineyard and Duxbury, were served over crushed ice with the essentials: lemon wedges, cocktail sauce, and horseradish. Expertly opened, perfectly clean and fresh, gorgeous in appearance with flavor honest and pure. Raw Bar perfection.

When he was three years old in Bhutan, Tanuj Neupane’s family, political refugees, were deported to Nepal, beginning a journey that ultimately landed him in Worcester.  A business owner now, he opened the first Nepali restaurant in town.

We shared an order of Steamed Momo: chicken, pork, and vegetables. Momo are dumplings filled with coarsely minced ingredients blended with tasty Nepali spices that come with three dipping sauces: chili, soy, and his own custom sauce. Dumpling shape and crimping technique were varied for each filling.

At first bite I discovered why Momo had been so highly recommended. The fillings retained the integrity of their ingredients: instead of mushiness, you could see bits of the individual vegetables and cuts of meat. Plus, Tanuj is such a nice guy you’ll want to love his food!

Scanning their menu board, I didn’t need to look past Pasta Amatriciana to know what our next course would be. This is a special recipe not commonly encountered around here but considered a classic in Rome.

We were seated across from another pair of diners at Mani’s table, a thick hunk of gleaming timber surrounded by chairs. In anticipation of lavish flavor, I ordered a glass of Montepulciano, deep ruby-red with dense tannin and peppery fruit flavor.

PM’s Amatriciana was one of the best, worthy of any Roman trattoria. Thick spaghetti was cooked defiantly al dente; the sauce features chili pepper, red onion and guanciale (an Italian process for cured pork jowl) and was seductively robust with thin coins of guanciale adding depth of flavor beyond the means of the comparatively simple pancetta.

We’re already fans of their main location in West Boylston; here at the WPM the selection was more limited and dominated by children’s flavors such as fruity pebbles and funfetti cake.

Despite that we achieved satisfaction. I was happy with my cup of Stracciatella, creamy vanilla gelato with flakes of crackly dark chocolate. My friend ordered a combo of chocolate and coconut.

Though their name sounds somewhat industrial, don’t be fooled! Froze Zone’s flavors are intense and their textures are extraordinarily creamy. The dark chocolate is mega-dense; it’s my favorite.

There’s nothing new about public markets. They’re often a riot of sights, sounds and fragrances.  Market day can be something of a celebration where the entire town gathers. The Worcester Public Market achieves some of that spirit.