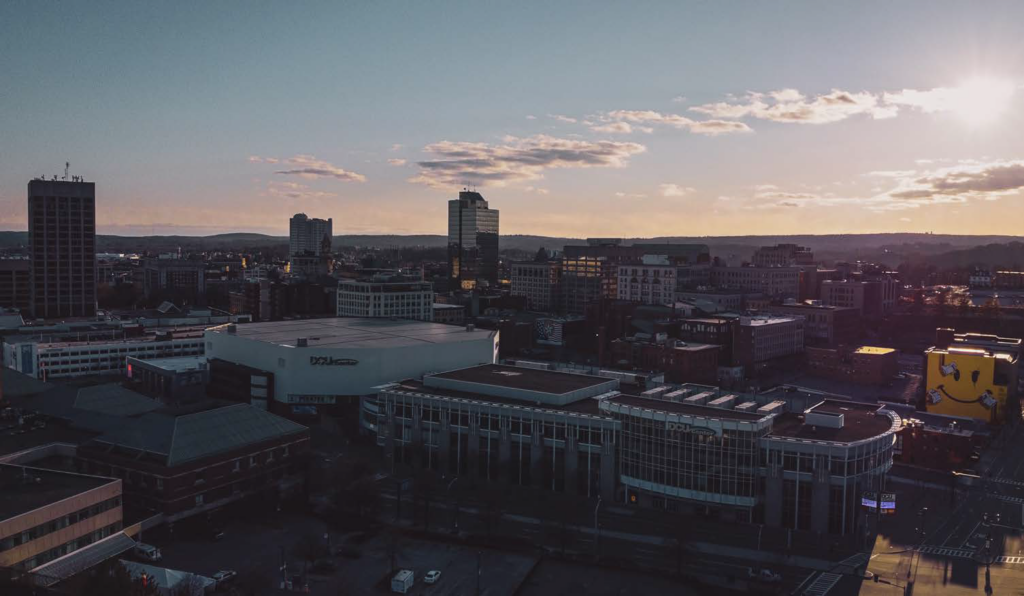 I once heard that the name Worcester translates into “working city”. A little
research has revealed that this was nothing but an old wives’ tale, borne no doubt
out of our city’s incredible production and factory legacy and its proud labor force.
The truth of it is, unsurprisingly, more complicated. It is unclear what the name
Worcester meant for the very first people who settled here in 1673, who then
would’ve been living in Quinsigamond Plantation. It took almost two hundred more
years for Worcester, as we have come to know it, to become its own city in 1848.

This year we celebrate the Tercentennial, three hundred years of immigrants and
settlers pouring into this city and calling it home, integrating and clashing with each
other with every added layer. Neighborhoods were unofficially divided by
nationality, for example Italians lived around Shrewsbury Street while Vernon Hill
was overwhelmingly Polish. I spoke with Bill Wallace from the Worcester Historical
Society to learn a bit more about the past three hundred years. “It has taken a long
time for us, for the record keepers to fully understand, accept and celebrate the
many contributions of immigration into our culture, and that’s where we are now,
that’s what we are trying to acknowledge and celebrate.” Per this initiative the
Worcester Historical Society has launched several budding exhibitions over the past
century telling some of these immigrant stories.

One such initiative, launched almost 35 years ago, told the story of Orthodox Jews
immigrating into Worcester from all over Eastern Europe at the turn of the 19 th
century, living all along Water Street. The whole area was lined with small bakeries
and restaurants, where local newcomers could meet up with each other, and take
comfort in community in their new home. “This particular exhibition was a seminal
moment in the way we tell the story of Worcester, because most of the stories told
up to that point were stories of immigrants from the Anglicized parts of the world.
This was the first time that we had shifted our focus into talking about immigrants
from other parts of the world, from Eastern Europe for example.”

Present day efforts to define and record Worcester are far more inclusive and
widespread. “We have worked hard to reach out and cover ground with all of our
immigrant populations, Armenian, Finnish, Swedish, Albanian, African-American
and the Latino/a communities, as well as the people indigenous to the Worcester
area before settlers started pouring in. For instance we just wrapped up an
exhibition on the LGBTQ community called ‘For The Record’ in 2019 and it was very
powerful. For that we partnered with local universities like Clark, WPI, Holy Cross,
and Assumption.”

I was fortunate enough to catch the most recent exhibit at the Worcester Historical
Museum, involving the evolution of women’s fashions over the course of history.
The exhibit covered apparel from various societal strata, ranging from casual factory
wear, glamorous evening wear, and present day business attire. Part of the

It’s not easy to capture the spirit of something so sprawling and dynamic as a whole
city, full of people who are themselves evolving. Nevertheless, developing and
honoring a sense of integrity is something with which all good historians are tasked.
When I asked Bill about pivotal moments that he would describe as defining of
Worcester and its history, he was able to distill the following top three: Goddard’s
first liquid fueled rocket launch, the first –as some historians tell it –American
revolution, and the first political national women’s rights convention.

When Goddard first launched a coffee can at his Aunt Effie’s farm in Auburn on a
cold March afternoon in 1926, it revolutionized the way that we, as human beings,
viewed ourselves and the things that we might do. Goddard predicted that we’d be
able to use his model to go to Mars someday, and many didn’t take him seriously or
believe that he had proven that. The New York Times even wrote an article mocking
Goddard for his beliefs. “It wasn’t until 1969 when we finally landed on the moon
that the New York Times had to issue an apology to Goddard. And this really big
thing happened right here in Central Massachusetts, in our own backyard.”

The second most important event was the first American Revolution. “On
September 6 th 1774 over four thousand organized troops, a small militia, threw out
the British governance all over Worcester County. They weren’t even armed but

they managed to take a stand and overthrow British rule in this area. A lot of
historians think of this rather forgotten event as the true beginning of the Civil War.”

And lastly, the first national women’s rights convention that took place on October
24 th , 1850 in Brinley Hall across from present day Mechanics Hall. Abby Kelley
Foster, a local hero, was a pioneer abolitionist and women’s suffrage advocate who
spoke at the convention and set one of the earliest precedents of the adage ‘no press
is bad press’ by growing the movement through a deluge of bad press. Abby Kelley
Foster’s pioneering activism is reflected in present day Worcester and resonates as
another one of Worcester’s numerous strengths.

Present day Worcester has been growing and developing along similar lines for as
long as I’ve been here. In 2009 a group of animal rights’ activists launched what has
since become one of the biggest vegetarian expos in the country, with over 100 local
vendors and thousands of attendees. New England Veg Fest, as it is called,
celebrated its 10 th anniversary in 2019, with their biggest expo yet. “We used the
time off that we had in 2020 to help us reorganize and we ended up having a zoom
event in 2021. This year, we are back at Worcester State University and it’ll be just
as great as it ever was.”

Indeed all of Worcester is presently engaged in numerous initiatives to invite
everyone to come to the table and carve out a space. The Regional Chamber of
Commerce has set up various programs through which underserved communities

can make their voices heard and their dreams realized. The Diverse Food
Entrepreneurs program run by the Worcester Regional Food Hub receives more
than double the applicants it needs every cycle, and the results of this effort are
evident in the lush diversity of Worcester’s restaurant scene, including Vietnamese,
French, Cuban, and Ethiopian.

Of course the future is still being written. When I asked Bill Wallace what he, as a
historian, sees in Worcester’s future, he reminds me that he’s no oracle. But insofar
as hope can be fortunetelling, he is hopeful that the initiatives of the Worcester
Historical Society will bear fruit and inspire other areas of Worcester to continue
working towards inclusion and harmony. “Looking toward the future we have some
exciting projects coming up, we have the Worcester Latino Project’s exhibition
‘Somos Worcester’ that I am hoping will take place sometime in 2023. We are in
partnership with WPI for that one, and it’s been really gratifying so far. The exhibit
will come up some time in 2023. And we are in talks with the Albanian Festival
Community to begin a project on the history of Albanians in Worcester.” As the
Worcester Historical Museum expands in scope, it will also expand in form, as the
museum recently is absorbing two small spaces nearby.

The Tercentennial celebration later this month aims to highlight and celebrate all
the changes that have been made in the past ten years, despite the hurdles of the
pandemic. The Canal District stroll rounding out with the Polar Park fireworks
honors the incredible transformation of Kelley Square into one of our city’s most

While it is true that working city as a moniker was a mere fable, it is the kind of fable
that for me has grown into the meaning, is still growing. The strength of cities lies in
its variations, in having multiple avenues of possibilities and perspectives. As we
reflect on three hundred years of Worcester being some version of the city we all
know today, it is important to keep in mind our immigrant roots, the pioneering
spirit of our predecessors and our compatriots, the people working hard to make
the city a home for all, a place worth living in, a city that works, a working city.