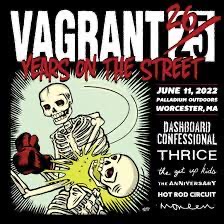 Vagrant Records is celebrating their 25th and 26th anniversary with a massive reunion show at the Palladium in Worcester on Saturday June 11th with Dashboard Confessional, Thrice, The Get Up Kids, Hot Rod Circuit, The Anniversary and Moneen. This lineup is going to make you pull out those youth large band tees and immediately wonder how you ever fit into something so tiny. It’s okay, we all looked cool back then, just check your old MySpace profile.

I had the amazing opportunity to chat with Riley Breckenridge from Thrice and Josh Berwanger from the Anniversary about this tour, reconnecting with old friends, and their bands’ continuing impact on fans. Full disclosure, this was super fun for me and probably the best perk yet of being editor at Pulse. Designing a Nervous Breakdown is still heavy in my music rotation, only instead of listening to it in my old boyfriend’s UMass dorm room, I play it full blast in my minivan to drown out my kids’ requests for the Encanto soundtrack.

26 Years on the Streets is only a two show tour, and I caught up with Breckenridge three days after their Irvine show. “It was great,” he says, “Playing a home show is always a treat for us.” Breckenridge was still decompressing from seeing so many of his old friends for the first time in years. “Leading up to the show I was just thinking, ‘yeah it’ll be cool, family and friends will be there it’ll be good,’ I hadn’t even thought about just reconnecting with people who were a part of our journey in its earliest stages. It was a trip, it was a lot of process, I was not ready for it at all.”

Thrice released their first EP First Impressions in 1999, and they are still going strong. They’re currently touring the US with Bayside, they’re heading to Europe in July and will kick off the fall with the Blue Ridge Rock Festival in September. “We’re so fortunate to be able to do this and have anybody care about what we do,” Breckenridge says, “It adds a level of importance and gratitude to every show we play.”

Everyone loves a good nostalgia tour, but 26 Years on the Streets is more than that, at least for me. These bands have been a part of my life for over two decades. Let’s be real, my 20s and early 30s were a total disaster, and so many of their albums helped me get through all the weirdness life threw at me. When I asked Breckenridge what it feels like to have made an impact on so many peoples’ lives, he was grateful. “It’s crazy, it’s something that has never really seemed real to me,” he replies, “Like I’m aware that it’s real, but it’s hard for me to kind of square up how much our music means to some people. I will have conversations with people and they’ll share experiences about what our music’s done for them or how it’s gotten them out of rough spots. It always floors me. Every day that we get to do this is a gift.”

Berwanger was equally as humbled by the Anniversary’s dedicated fans. “First, it’s amazing, it’s very amazing. I don’t know if I really have another word for it,” he says, adding, “To find years later that people still connect to it, it’s just really cool because we were never starting out to do that. It was for us to make music because we were passionate about it. It’s a beautiful thing.”

The Anniversary hasn’t toured since 2016, and aside from their two Vagrant shows, they have no plans to play in the near future. “When we’re going out to play, we know that we have these two shows and we might not ever do another show again. So you appreciate it instead of taking it for granted, really trying to live in the moment,” Berwanger tells me. As for the Irvine show, he says, “I think that’s why it was such a fun time, and the next one will be even more fun because you got all the little ‘hey how have you been’ out of the way and it’s more just like hanging out.”

Berwanger also discussed his backstage role as unofficial babysitter during the Irvine show. “The entire backstage was kids running around because almost all the bands brought their families, and for some reason all of the kids followed me around,” he laughs, “I was suddenly called funcle, like, fun uncle. I’ve never heard that before.” When Berwanger isn’t entertaining the next generation of emo legends, he’s focusing on music and basketball. He’ll be releasing the first single from his new project, Gemini Parks in July. “I’m really excited about it, it’s really different sounding too,” he hints.

Vagrant’s 26 Years on the Streets promises to be the epic reunion of the summer. “I’m extremely thankful we get to do it again in Worcester because I feel like I was too flustered at that show to even like, talk to people, it was nuts,” Breckenridge laughs. The fact that this tour is only two shows is crazy to me, and I am beyond excited that we get to scream sing our hearts at the Palladium like it’s the year 2000 again.