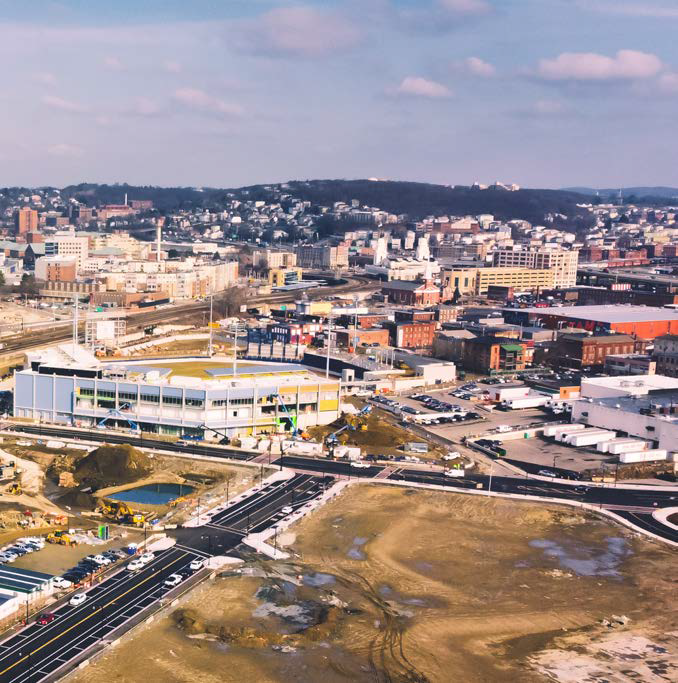 The Canal District is what some would say is Worcester’s true “downtown” or its “social realm”. When I think of going somewhere in Worcester to meet for coffee or grab a bite to eat, I typically go to the Canal District to take advantage of the active streets filled with restaurants, coffee counters and boutique shops. This mixed use district truly offers a vibrance in the city that is being quickly redeveloped, renewed and reimagined. Its aesthetic can be looked at as “modern industrial” being that the district has many former factory buildings that have been repurposed and renovated over the past decade.

One of the most successful developments in Worcester is the Crompton Place building for its mixed use nature or ground floor retail and restaurants and upper floor residential. The transformation of this former factory building to what is now one of Worcester’s most popular mixed use buildings in the city has brought many new people to the district and what some would say helped to kick off the redevelopment of the Canal District. When you enter the building on Green Street you can still see much of the industrial presence in the preservation of the building. The interior’s exposed brick work, refinished wood floor board and restored steel beams are still present in the building, giving acknowledgement to Worcester’s manufacturing era. For a mixed use district to be successful I believe it needs to be walkable, pedestrian oriented and be a safe place that people want to spend time in. The idea of having “eyes on the street” which was talked about by renowned urban activist Jane Jacobs, I think is important in any city to have a safe and enjoyable experience in the urban environment.

The southern end of Green Street, Harding Street and Water Street seem to be the most walkable, activated street fronts in the District. Packed with restaurants, bars and boutique shops. As you make your way north towards Union station however, the active street front seems to drop off and become a bit more quiet. The northern side of Harding Street still has a few former factory buildings that are sitting and waiting to be reused and reimagined. These buildings, somewhat still sitting untouched, have massive potential to become Worcester’s most popular mixed use development.

The former Heywood Boot and Shoe Factory and the Goldstein Scrap Metal building are two former industrial buildings on Harding Street with great potential to activate the street front with ground floor commercial if done properly. The interiors have beautiful exposed brick, large spanning wood beams holding up its floor plates and wide open spaces making them exceptional buildings to transform. I do not believe having residential on the ground floor in either of these would contribute positively to the walkability of the district and would only make the street front less active. It would be great to see some sort of ground floor restaurant space, cafe to create a popular spot for any boutique vendor. I think with the right ideas, a smart redevelopment scheme and the right anchor tenants, the northern side of the Canal District can flourish and be just as walkable, active and inviting as its southern parts.