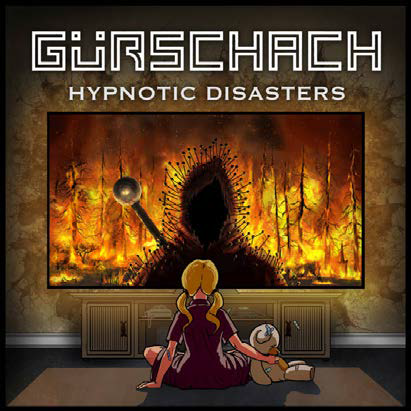 If you want mayhem, look no further than Gürschach’s new EP Hypnotic Disasters, a five-song follow-up to 2017’s Dark Matter. This San Francisco based experimental metal band lives up to the moniker with three original songs to pique your curiosity, plus two stellar covers to boot.

An unsettling organ starts “I’m The Grim Reaper,” conjuring a spooky vibe. A barrage of power chords and drums quickly take over, but instead of getting rid of the ear-provoking opening, Gürschach tries to incorporate the two together with mixed results. Although it doesn’t entirely work the way it’s intended, it’s still a cool idea.

It gets real on the dark techno of “Cyberocracy” and “The Incarceration Proclamation.” The former touches on the fear of becoming just another face in a system. “Cyberocracy” grinds and pummels with a cold, industrial rock edge as singer X warns: “Welcome to the corporate hive/Sell your soul to stay alive.” A distorted synth solo teleports the listener into a nightmare hive of electric bees, for the best moment on the EP.

“The Incarceration of Proclamation” starts out slow and mellow before shifting to a swing beat, making it feel like two songs in one. The lyrics about the greed and sins of our country’s past are eyebrow-raising. It’s hard to tell if they’re being satirical when X sings, “And no we’re not gonna let some commies change the land of the free/‘Cause this is how America’s always been and how it’s always gonna be.”

The covers of Metallica’s “St. Anger” and Slayer’s “Dead Skin Mask” are both solid, but an extra blast of energy to “St. Anger,” gives the original a run for its money. Hypnotic Disasters is not perfect or without its faults, but it is an interesting and unique listen.

Get ready to be propelled to worlds unknown with Esprit
D’Air’s new album, Oceans. Esprit D’Air is a London-
based Japanese electronic metal solo project led by
vocalist, multi-instrumentalist, and producer Kai. Knowing
that Kai has created these songs herself and recorded
them at her own home studio is mind blowing when you
hear the amount of work that has gone into the finely
produced songs on Oceans.
Anchored by a heavy metal foundation of surging, progressive
guitars and pounding drums, Oceans is given
that extra blast of energy thanks to fast-paced synth
melodies. This is a bright and energetic metal album
with techno dressing that has 2022 written all over it.
Whereas other metal bands thrive in the dirt and grime
of yesterday, Esprit D’Air is living in the shiny and pristine
future.
“Ocean’s Call” is one of many adrenaline-pounding
songs on Oceans that walks a fine line of frenzy and control
as no space is left open. Every nook and cranny is
used to its potential, whether it’s a guitar lick, kick drum,
or synth keys bouncing every which way. Oceans is like
strobe lights for your ears and should come with a warning
saying so. “Calling You” is another standout with a
trippy opening, while “Nebulae” offers up alien signals.
Kai knows how to slow things down when needed, however,
and about halfway through Oceans you’ll notice
a change in the current as more traditional pianos are
brought in for somber instrumentals “Distant Waves”
and “Moonlight Tides.” You can hear waves crashing on
the latter.
With its bright and glossy production, pure energy, and
mix of metal with techno elements, Esprit D’Air’s Oceans
is bound to turn the tide for what metal can sound like
moving forward.
For more, visit: www.espritdair.com/