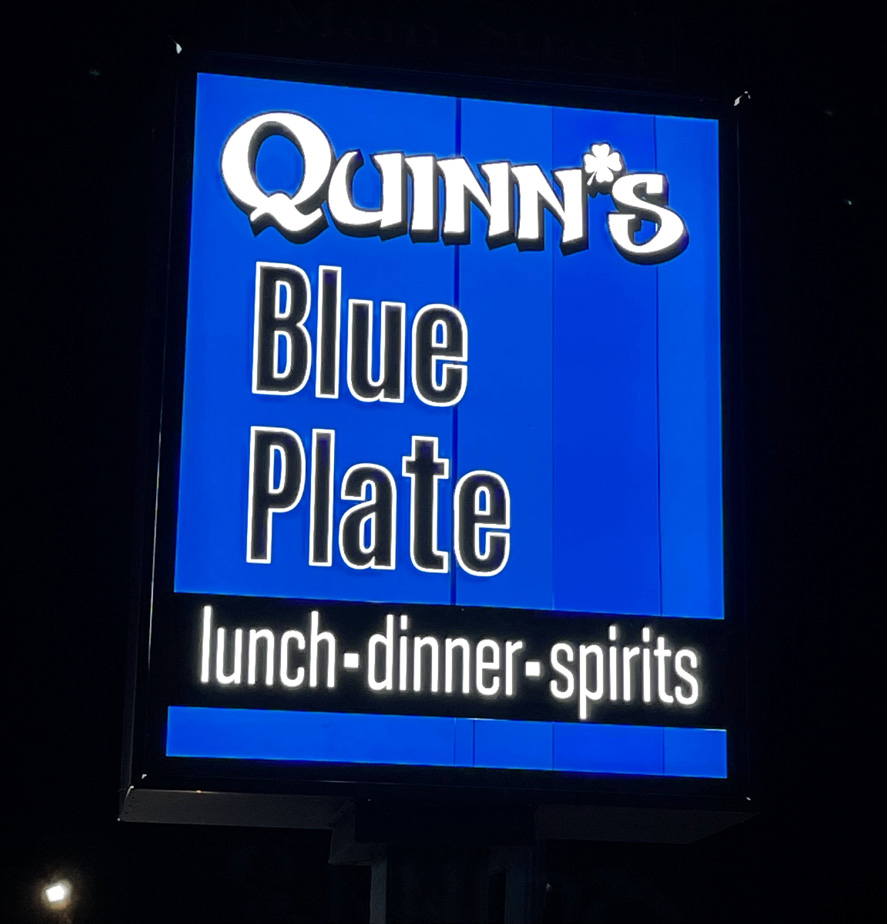 The quest to replace Holden’s Blue Plate, a thirties-era landmark famous for its low-priced blue plate lunch special, with Quinn’s Blue Plate has been a long and bumpy journey. I don’t know the full story because I stopped asking Tim Quinn about the project’s status when it became clear the topic was stressful. But that’s history now, Quinn’s Blue Plate is open for service and, with it, Holden’s dining scene has taken a leap forward.

On my first visit to QBP I took note that the layout, a large central bar surrounded by tables for dining, reminded me of the Worcester Quinn’s. A major difference, though, other than its sheer shiny-clean newness, is the feeling of open space. While the Worcester location almost guarantees inter-table cross talk, QBP seems more relaxed.

The Quinn formula for hospitality seems to breed popularity and that’s already happening in Holden. On this mid-week evening parking the car was a challenge that rewarded patience, strategy and an agile turning radius.

Once I’d dumped the car and found the table my friend had staked out, I was ready for a draft and presto! As I’d hoped, they have Holden’s Seven Saws Brewery products on tap. I enjoyed a glass of their VII IPA, cloudy-amber, refreshingly bitter with subtle juicy-citrus flavors. Seven Saws is just down the road from QBP with a brand-new tasting room, stop in to introduce yourself to their brews and befriend the crew.

The QBP menu is packed with a full range of comfort foods; classic sandwiches and burgers; a range of entrées that tick off all the American Cuisine boxes. I know several people who rave about Quinn’s Shepherd’s Pie. They’ll feel right at home here.

We started out with something hot. I sampled a crock of French Onion Soup. Its thick seal of stretchy molten cheese gave way to a dark-brown beefy broth loaded with hunks of soft onion that had contributed their sweet flavor. This steaming-hot soup was perfect for dispelling the chill of a bitter-cold January day.

My friend, ever the chowder junkie, was equally happy with his bowl of Mary Murphy’s Clam Chowder. Creamy thick, and rich, he topped it with a bag of oyster crackers. It yielded up spoonful after spoonful of bits of clam and tender potato. Add to that a couple dashes of Tabasco sauce and he was one happy New Englander.

Upon ordering my entrée, Blue Plate Buffalo Chicken Mac & Cheese, our server nodded, “Great choice!” Concern that she may have been teasing me dissolved with my first bite. The pasta was cavatappi perfectly prepared al dente; all those curls and ridges were enveloped in a creamy cheese sauce studded with veins of melty cheese that stretched with each forkful. The large baking dish full of mac & cheese was tossed with chunks of chicken and drizzled with plenty of buffalo sauce that offset the cheesy richness with a nice bit of fire.

“Move over, Ruth’s Chris!” was my friend’s reaction as he devoured his entrée, QBP’s Cajun Ribeye.

In recent months I’ve seen plenty of thin over-cooked cuts of meat passing as steak. QBP’s ribeye was what a steak ought to be. Thick, perfectly cooked pinkish red in the middle with a deep seared-in cross hatching of grill lines that gave it a tasty char flavor; juices ran from it with each slice. Served with creamy mashed potatoes and sweet corn niblets, this steak takes informal dining to a higher plane.

Holden has not, historically, been a vibrant dining destination. True, there have long been some notable options for meeting friends in town. But now, Quinn’s Blue Plate really puts Holden on the map.