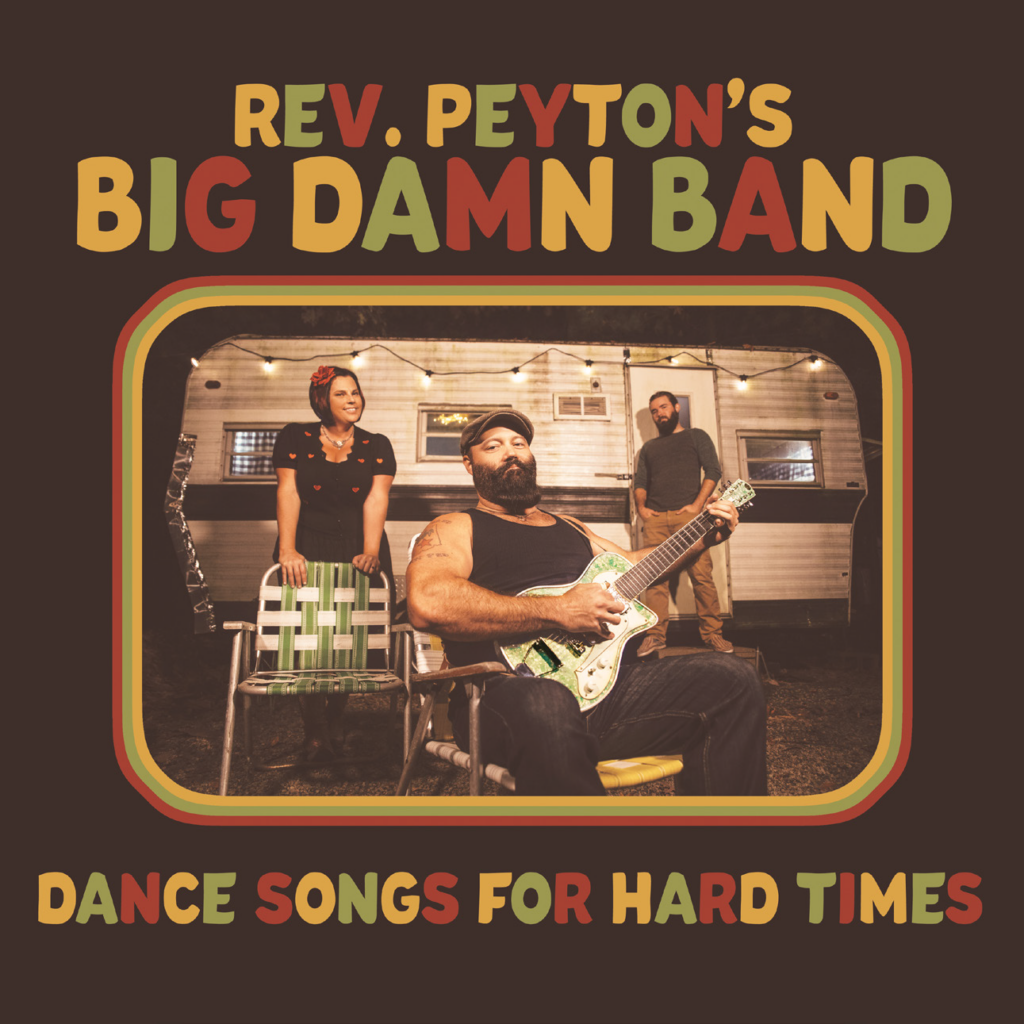 A lot of music has come out of the COVID pandemic that is, well, about the pandemic and the hardships it has created for many, whether it be losing a loved one, losing a job, or just dealing with the isolation of staying at home. Rev. Peyton’s Big Damn Band, led by singer/guitarist Josh Peyton (who goes by the name Rev. Peyton), is among one of the standouts thus far with Dance Songs for Hard Times, a new and swinging country blues album that really lives up to its name.

From beginning to end, Rev. Peyton–backed by his wife and washboard player, Breezy Peyton, and drummer Max Senteney–sings and plays his heart out on Dance Songs for Hard Times, a collection of songs that offers an honest and sincere look at what it has been like to live during the past year and a half. And, no, this isn’t a commercialized and gleaming “country” album; this one has all the character and grit that a country album should have. The opening song “Ways and Means” sets this underdog tone with Rev. Peyton singing from the perspective of someone who has the talent and drive, but is maybe missing that elusive it’s-all-about-who-you-know contact or financial backing. It’s a great southern blues jam that has a dirty, barnyard feel, giving it real character.

“Too Cool to Dance,” a rockabilly blues number with a strong southern kick, is the album’s centerpiece, giving its listeners a good message: don’t let those special moments pass you by because they’re not guaranteed to happen again. “We may not get another chance/ Please don’t tell me you’re cool to dance,” Rev. Peyton sings. He delivers more lines that are sure to stir up some emotion, especially in “No Tellin’ When,” a tune that really captures the feeling of isolation and fear of the unknown. With a menacing, pulsing guitar line and nothing else behind him, Rev. Peyton sings, ““No tellin’ when I’ll see my mom again/No tellin’ when I’ll get to work again,” and, later, “No tellin’ when I’ll see my friends again.”

What makes these songs on Dance Songs for Hard Times have such a gut punch is the vocal delivery of Rev. Peyton, who digs deep and roars out his lines with a primal urgency that demands your attention. That feeling of authenticity translates over to his impressive fingerpicking and slide work on the guitar, making for a combination that is both memorable and impactful. The mellow and melancholic “Dirty Hustlin’,’’ about someone contemplating going back to their old ways they’re not proud of so that they can make ends meet, might get lost in other instances, but Rev. Peyton sings it with such believability–and a catchy hook–that you’ll want to listen to it again and again.

With Dance Songs for Hard Times, Rev. Peyton’s Big Damn Band captures lighting in a bottle and earmarks a dark period to use as a lesson going forward. It will remind you not to take life for granted and to make the most of it in your own way, whether you’re living through a pandemic or not.