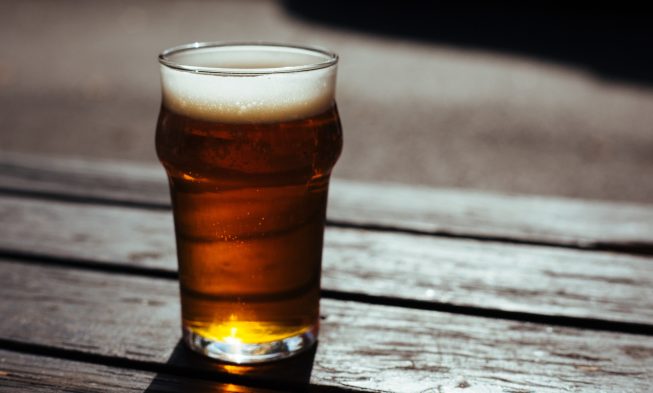 I’ll be honest with you, I haven’t had much time to go out to breweries lately.
Between selling my house, moving in with my in-laws, taking a woodworking course up in Maine, and house hunting with my wife every weekend, beer has come served to me in the form of a bottle or can fresh from the refrigerator.

So, what might a renowned beer columnist such as myself drink when he’s too tired to go out in search of something new? Whatever my father-in-law, Keary, has on hand.

I’m at an advantage here. Keary is a great lover of beer and someone whose tastes and preferences have been mentioned many times in this column. Most often, the beverages that emerge from his fridge are of the IPA variety.

However, there are different IPA’s for different occasions.

Coming back from a long day of work, Keary’s IPA of choice is Be Hoppy. Affordable and reliable, it’s just the sort of crisp hoppyness one needs after a day on their feet. The pack is exhausted in about two to three evenings. Be Hoppy has, for me, become associated with what the majority of Americans know as the “Budweiser Phenomenon.” That is, dissecting the go-to beer of the working man. Bud has held that mantle for a very long time. But, in the residence of Keary Naughton, Budwieser is replaced with Wormtown. It’s an improvement on the phenomenon at the very least.

Then there are the days he gets to go sailing. His boat, moored in North Kingstown, RI, is in very close proximity to Tilted Barn Brewery in Exeter, RI. I often wonder if that’s why he moors his boat where he does …

Anyway, on the days Keary goes sailing, more often than not, he will arrive home in the afternoon with a selection. He’ll have something for me: Exeter Farmhouse Pale Ale, a refreshing, herbal pale ale whose flavors are in no way masked by the hops in use. He’ll have something for my wife: Sunrise Over Sea (Raspberry, Blueberry, Blackberry) Sour. As someone who is not the biggest fan of sours, I can tell you that this one fits the mold perfectly. It is TART.

And, of course, Keary will have something for himself. His favorite beer from Tilted Barn flip flops between Summit American Pale Ale and Violet (The Original Farm Girl) IPA. Summit is a straightforward IPA without a lot of fuss. It’s pretty pale, with notes of malts and hops, but nothing at all overpowering. It’s brilliant on a warm day. Violet is a little more citrusy, though she maintains her smoothness and drinkability without sacrificing flavor on the altar of hops.

I certainly haven’t been in want of beer these last few months. I’ve certainly needed an end-of-day brew on more than one occasion. Still, with its proximity to the Bay State, I hope you’ll check out Tilted Barn. They’re brewing up some really good stuff down there. My father-in-law is no fool.