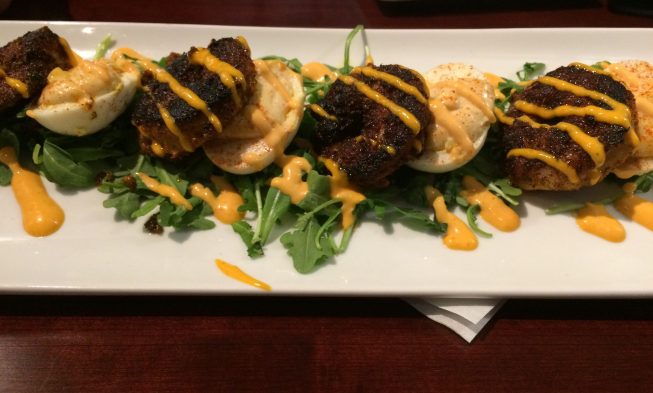 Restaurant start-ups seem to happen all the time and though I try to pay attention and keep track of them, there’s one that I’ve anticipated with special interest. That’s due to its pedigree; after I heard that Table Twelve was a project by the owners of the Black & White Grille of Spencer, I knew it was just a matter of time before I paid them a visit.

Though they’re well known to the people of Spencer, the Black & White ranked as one of our more noteworthy ‘discoveries’ in the past few years with a wide-ranging menu, quality preparation and friendly service. I’ve recommended it ever since that first visit.

We’d soon find the B&W tradition has been successfully transplanted to West Boylston in the location that previously housed Keepers Pub.

To start, the interior’s been totally overhauled. It’s a long building with the main dining room and lounge area facing the street. It’s light and airy, totally uncluttered. Behind that is a long hallway with a couple more dining rooms. Upon arrival, we were seated in a booth up front. Kaitlin, our server, greeted us with a level of friendly enthusiasm that made her a welcome guide to our first visit.

In choosing an appetizer I was tempted by the Honey Sriracha Shrimp, one of the items that scored so high in our meal at the B&W. That impulse gave way to curiosity when we noticed Devil’s Shrimp, a pairing of deviled eggs topped with Cajun-blackened shrimp. Two hardboiled eggs were sliced in half, stuffed with their mashed yolks and topped with large shrimp that had been blackened over high heat till crusted with Cajun seasoning mix.

They were served lined up on a long rectangular dish over a bed of arugula leaves and drizzled with spicy sriracha aioli. The easy approach was to eat the shrimp and eggs separately; but to discover if there was ‘flavor magic’ in combining the two I jabbed a piece of egg and shrimp together. Alas, no alchemical magic occurred, but the contrasting flavors and textures were pleasing and made this an ideal appetizer.

My glass of Bay State Beer Company’s ‘Becky Likes the Smell’ was the ideal counter to the salty crust of Cajun spices. Its piney citrus flavor profile smooths the hoppiness and alcohol level of this imperial double IPA. Initially attracted by the colorful graphics of their 16 oz. cans, I’ve become a fan of ‘Becky’ and look forward to Bay State’s expansion into Worcester.

Browsing beyond appetizers, the menu contains a comprehensive list of salads and soups and continues with ‘between the bread’ sandwiches; ‘between the buns’ burgers; steak and chop ‘main meals’ and ‘from the pasta pot’ selections that includes six variations of mac ’n cheese. Seafood options are all market priced which would seem to bode well for freshness.

And then there’s a section of ‘pan pizza from the hot stone oven’ and a half-dozen meals for the ‘little ones’. On this mid-week evening several families were taking advantage of this.

From this comprehensive array my companion kept things autumn-traditional with an entrée of Stuffed Bacon Wrapped Meatloaf. Meatloaves come in many forms and seasoning strategies. At Table Twelve the meat mixture had been molded into single-portion meatloaf that encased sautéed mushrooms and mozzarella cheese. Then it was wrapped in bacon slices and baked till the exterior was tasty and dark brown. It arrived pre-sliced and drenched in beef gravy alongside a heap of mashed red bliss potatoes. (vegetables would be ordered from the list of sides). The result? A moist and tender meatloaf that yielded rich cheesiness and mushrooms in each bite.

Table Twelve seems to favor options in their menu. My entrée, simply termed ‘Scampi’, is an example. It can be customized to include no protein or outfitted with chicken or shrimp. I chose shrimp and was pleased to discover more than a half-dozen of them luxuriating in the olive oil white wine-soaked angel hair pasta.

The structure of this scampi followed the basic recipe: a touch of lemon and basil flavored the garlicky wine sauce that I sopped up with the grilled slice of buttery bread. Where the dish differed, though, was with the addition of chopped tomatoes and sautéed spinach. This worked as a nice touch and was visually attractive in creating Italy’s ‘il Tricolore’.

Assuring us that desserts are ‘divine’ and baked ‘just up the road’, Kaitlin approved our choice of the Caramel Apple Tart. An almond pastry shell contained warm apple filling topped with streusel ribboned in caramel sauce. It came with a puff of whipped cream over a drizzling of creamy cinnamon syrup. Everything about this spelled ‘scrumptious’. It disappeared in a flash.

All too often the expectations of a sequel are way too high and, when finally experienced, prove disappointing. But this was not so with Table Twelve; the owners have replicated the successful features of their Spencer enterprise and developed a very different dining experience in West Boylston.