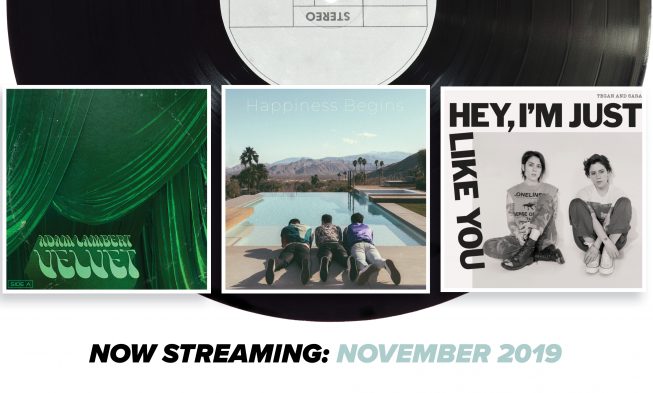 If you want people to pay attention to you, be a tiger, a unicorn, or Adam Lambert. As its title suggests, Velvet: Side A, is the first installment in a highly-anticipated two-parter and Lambert has our full attention. If the “A” side is any indication, Lambert is in on course to offer audiences his best work yet (and that’s saying a lot).

Whenever someone tries to label Lambert, the man’s not having it. He’s rock, he’s pop, he’s funk, he’s soul. Hell, he’s been standing in as his own incarnation of Freddie Mercury for almost a decade now—and winning raves. But Lambert is no imposter or poser. He’s the real deal with talents that are reminiscent of the Queen front man, but he’s also an original artist in his own right.

Side A’s lead single, “Superpower”, is the type of kick-ass anthem we all may need in our lives right now. It’s bad-ass. With elements of disco, funk and 70s soul in spades, “Superpower” is the kind of song that exudes confidence and lets people know, in case it wasn’t clear, he’s in charge: “You try to put me in a box/Make me something I’m not/ Don’t give a fuck, ‘cause I’m gonna take back/ My superpower.”

Rock of the ‘70s may be at the album’s core, but disco, dance, pop and R&B weave their way through all six tracks, and they play well together. Lambert changes his sound to suit his path, a chameleon who keeps true to his muses but adapts as he chooses. By re-working a sound and vibe from several decades ago, he’s winking at modern audiences and giving us all something to swagger about.

“Now everything has changed/We found better days,” the Jonas Brothers sing on the song “Rollercoaster,” chronicling the highs and lows they’ve experienced throughout their careers, leading to their reunion on Happiness Begins.

The Jonas Brothers’ comeback album Happiness Begins is a pop extravaganza full of catchy songs that makes up for the six years we’ve been without the trio. Nick, Joe and Kevin have certainly grown up since we last heard them together, and those years of living are reflected in many of their new songs. Nick’s contribution, “Love Her,” is dedicated to his wife, as is Joe’s song “Hesitate,” which he penned for his fiancé, actress Sophie Turner. With a heartfelt and melancholic tinge, “Hesitate” is the most effective, as Joe sings, “I will take your pain/And put it on my heart/I won’t hesitate/Just tell me where to start.”

But that’s not to say that they’ve forgotten how to have fun. “Sucker,” “Cool” and “Only Human” are all upbeat numbers that are sure to get you dancing. “Only Human” and “Every Single Time” both feature a nice reggae flair that spices up the flow with an extra kick of energy. And just try to get the earworm magic of “Happy When I’m Sad” out of your head.

As the album’s title suggests, the Jonas Brothers are looking to start this new chapter off on the right foot, and they certainly do that. Happiness Begins gives reason to believe we are now just entering the prime years of the Jonas Brothers.

Canadian twin sisters Tegan and Sara have been around for quite a while, though for some reason, haven’t made it into the mainstream here in the USA as much as I think they deserve to. Their pop-punk-synth style is fun and refreshing and the subject matter is completely relatable. They kind of just radiate quirky coolness, like a frilly dress with combat boots.

Their latest (and ninth) album is a modern interpretation of late 90s music with many elements of today’s influences, stripped down to a slightly angsty emotional bareness. I loved every song on this album because they all had their own unique message and energy about them, but favored the more simple, acoustic songs most.

The first song, “Hold My Breath Until I Die”, goes back to that end of the world feeling after the teenage break up that we’ve all dealt with at some point. In fact, the entire album was born from songs they did write many years ago, revisited with that hindsight that comes with time. The title song, “Hey, I’m Just Like You”, is a great nod to just being yourself and having that one person in your life that just “gets you”.

I really loved “I Don’t Owe You Anything”, that speaks to anyone who has had that toxic and draining friendship or relationship in their life where it’s always more take than give. Then, “Please Help Me” cries out with the fear of not belonging or amounting to anything when all is said and done. The ending song, “All I Have to Give the World is Me” sums up the album’s transparency and the desire to rip the mask off and live a most authentic life instead of trying to meet everyone else’s expectations.