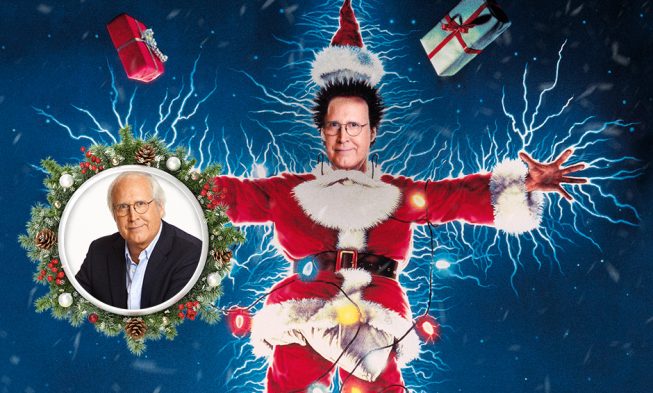 Chevy Chase knows how to be fashionably late.

Calling from his home in upstate New York a few minutes past our scheduled interview time, the comedy icon sounds genuinely concerned.

Assured that everything is good and asked if he is ready on his end, he deadpans, “Yeah. I’m naked, but that’s fine.”

And that’s Chevy Chase, the 76-year-old comedian still doing what he does best, delivering his patented brand of dry, witty humor that helped make films like 1989’s “National Lampoon’s Christmas Vacation” into a classic.

The holiday season has become synonymous with Chase thanks to his starring role as bumbling family man Clark Griswold in the over-the-top yet heartfelt “Christmas Vacation.” It just wouldn’t feel like Christmastime without seeing Clark and his family getting chased in their home by a crazed squirrel, or watching his reaction when he cuts into an overcooked turkey.

This year you’ll have a chance to watch those scenes with the man himself when Chase brings “Christmas Vacation” to the Hanover Theatre on November 20 for a 30th anniversary screening and audience Q&A.

“I think it’s reminiscent of what people’s families really are like during Christmas and, even given the eccentricities of the cat burning up and the squirrel landing on my back, basically it’s sort of the way it is,” Chase says about the film’s enduring appeal. “The right cast and cousin Eddie (laughs). I think it just makes for a fun ride.”

Chase’s ride of course really started over ten years prior to “Christmas Vacation” when he was cast as part of the original Saturday Night Live lineup alongside other soon-to-be household names, John Belushi, Gilda Radner and Dan Aykroyd. Known collectively as the Not Ready for Prime Time Players, the cast of SNL’s debut season in 1975-1976 set the standard for those who followed.

But Chase wasn’t originally intended to be part of the performing cast.

“Lorne (Michaels) made the deal with me that I could come and be the head writer, which he really wanted, but performing wasn’t questionable until there was a tryout among all of us,” Chase says. “I did a tryout of something like the newsman and, before I knew it, I was doing Weekend Update and stuff like that.”

Chase would stay on as a member of the SNL cast for only one season before making the jump to movies—the first SNL cast member to ever do so—but he looks back fondly at his time on the television show.

“Oh my gosh, that’s a long time ago, but I remember so much when it’s told to me,” he says. “The whole damn year was great. For me it was ‘Oh my god, I’m famous’ kind of a thing and ‘I love doing this, god I hope we can continue.’ It was great.”

Chase’s movie career got off to a quick start shortly after his SNL departure, with 1978’s “Foul Play” and “Caddyshack” in 1980, in which he co-starred with a cast of other talented comedians.

“It was like working with a brick” Chase jokes when asked what it was like to share the screen with Rodney Dangerfield in “Caddyshack.” “One of the dumbest guys I’ve ever known, but I loved him. In fact, we got to be pretty good friends. It was really Ted (Knight)’s movie in my opinion, Ted and Billy (Murray). So, you know, you just keep moving along and getting better.”

It continued to get better for Chase three years later when he starred in the first National Lampoon’s “Vacation” movie, introducing audiences to the one and only Clark Griswold. There have been four theatrical sequels to date since then, with “Christmas Vacation” being the third overall in the series.

Besides a run at the Oval Office (“I’m considering the presidency”) Chase is game for more Griswold hijinks, saying he’d be up for bringing the character back to the big screen after his last appearance in 2015’s “Vacation.”

“Sure! I love that character,” he says. “It’s a lot of fun. On the other hand, I also did different characters in my life I must say, and they’re all fun to me. I just love making the pictures, guiding them through, and changing lines and all the stuff that you might not expect.”

Gracious and generous with his time, Chase continues to talk for over twenty minutes about his career during our interview. “Three Amigos” with co-stars Martin Short and Steve Martin is a favorite of his (“Oh my god I love that movie. Those are my two close friends. We had a blast.”) as is “Fletch,” calling it his “best experience” because of the freedom director Michael Ritchie gave him to improvise (“Without a doubt because it really was me and just given the opportunity to wing it.”).

It also turns out that the Griswold house was the same house on the Warner Bros. lot used in “Lethal Weapon.” While filming the “Christmas Vacation” scene when Clark is decorating his house with lights and falls into the bushes, Chase actually landed on a forgotten toilet left behind by the prop people from “Lethal Weapon,” a “nice reminder from Mel Gibson and Danny Glover,” he says. He also broke a pinky finger when Clark decides to punch the reindeer decorations after the lights don’t work.

While “Christmas Vacation” has become a staple on cable television each holiday season and a beloved film watched by many, Chase isn’t necessarily one to seek out his own movies. So, what does he watch instead to get into the holiday spirit?

Without missing a beat, Chase gives his answer.

After the joke, there’s a brief pause before he concedes a more honest follow up, giving props to another well-intentioned onscreen family man in George Bailey. “Hey,” Chase says, “‘It’s a Wonderful Life’ is probably the best.”