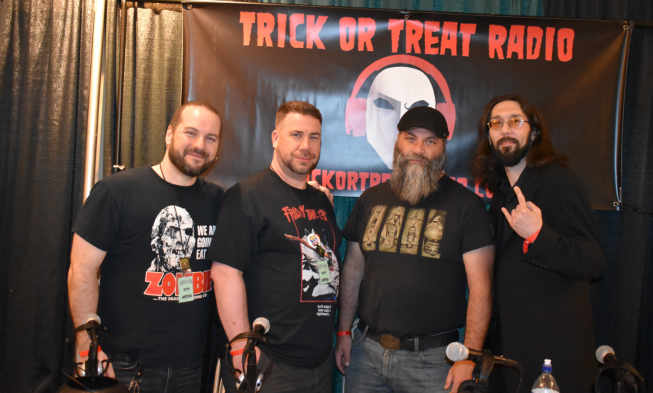 The year was 2012 and four men who knew each other for over 20 years had one thing in common and that was their love for horror and Halloween. Growing up in neighboring towns around Worcester and attending similar social events ultimately joined them at the hip in creating this podcast. Jesse Smith, Rich Caron, Tim O’Connor and Michael Constantine realized they had a unique concept in talking about horror films, streaming horror releases, comics, video games, TV shows, music and other things associated with that genre. Once the podcast was perfected, they decided that they would give these horror films a thumb up or thumb down rating. Smith said, “We use the Siskel and Ebert method in giving these movies a rejection or approval. But we also use trick or treat to review our movies as well; and that encompasses a little mayhem so that’s how the inception of Trick or Treat Radio started.”

Their original intention was to promote the band called, The Deadites, a dark electronic band that was started by the former hosts of trickortreatradio. However, after some format changes, they decided to use the music and focus more on interviewing authors and artists such as: Mike Allred – comic book artist, writer and filmmaker; Tony Timpone – editor Emeritus from Fangoria magazine and R.A. Salvatore – NY Times bestselling author among many other esteemed guests.

Their live broadcast is on trickortreatradio.com which airs every Wednesday from 9 p.m. to midnight. This time slot allows most people from the West Coast to hear it and East Coast listeners can enjoy it without staying up too late. Additionally, they release the audio to several podcast providers including: Apple, Spotify, Stitcher Radio, and Google Play.

As their podcast grew, so did their local audience. This resulted in them having a live show every year at the Rock and Shock in Worcester. “This is a big event for us and many other listeners from around the country will drive or fly in just to hang out with us for the weekend. Last year we had many local visitors and many from California, Ohio, Florida, Chicago and Alabama. Typically podcasting is a one way street, but we want to make it a two way street as much as possible so our listeners can interact with us,” Smith said.

Currently there is alot of heavy static and competition of podcasts in the media so these guys have other jobs to generate income. But through hard work and lots of money, the Wednesday time slot finally came into production. The banter between these men in sharing their different views on Halloween movies creates a momentum and variety for a diverse audience. When one of them is voicing a serious point, the other three will chime which allows their listeners to hear multiple opinions so everyone isn’t locked into one perspective.

These four podcasters have been together for many years. As with most groups, they were challenged individually, but these men all learned to respect each other’s views and sentiments. However, at the end of the day, they finally realized the friendship should always trump over any disputes.

Trickortreatradio.com’s huge fan base keeps growing. Besides being popular in the States, they are known globally in Australia, Finland, Russia and Canada. “If you go by our social media accounts, they number in the thousands, and we have a large listener base that tunes in regularly. After trying different platforms, this podcast and subject matter seemed to stick and works best for us,” Smith said.