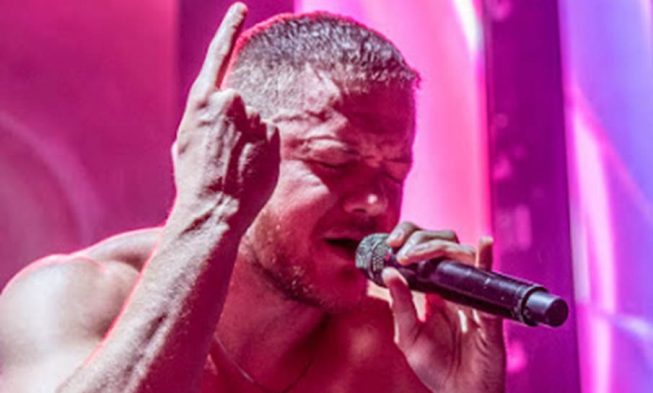 Xfinity Center in Mansfield came alive recently with a completely full house to welcome Imagine Dragons, a band who I feel has only just begun to show us what they are capable of.  Rising to super-stardom status in the short span of 10 years, we are all familiar with mega hits “Radioactive” and “Demons,” and the latest album they are touring to promote, Evolve, showed an entirely new level of talent – blending pop, rock and even hip-hop elements seamlessly to appeal to a uniquely diverse fan-base.

I go to many shows at this venue and I was happy to see every seat filled, which has not been the case lately for many shows I’ve been to.  I am not sure if it is ticket prices or lack of interest in live concerts, but it made my heart happy to see this long-time institution bursting at the seams with fans. And man did these guys ever put on a great show.

I am ever-impressed with singer Dan Reynolds, who sports an impressive vocal range and an equally impressive physique.  Shirtless for most of the show, I was certainly not complaining. Reynolds commands the stage, genuinely looks like he is having a great time and masterfully lands every complicated many-worded run of lyrics that the band’s songs are known for. My favorite, “Whatever It Takes,” got the crowd pumped up, but their song “Thunder” was met with a fitting thunderous applause, inspiring dance moves I am not sure I’ve ever witnessed before. 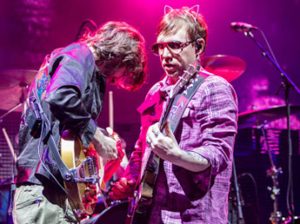 One of my favorite moments of the show was when, in what seemed like an impossible flash of a moment, the band suddenly appeared in the middle of the audience, set up at the sound board. A couple ballads later and really showcasing the band’s raw ability to execute perfect instrumentals on their acoustics, Reynolds walked through while singing “I Bet My Life”, stopping to sing to a beautiful boy in a wheelchair, with his face only inches from his and his hand on his head, looking right into his eyes for a good couple of minutes as he gave him a personal serenade.

In what seemed like another blink of an eye, the band was back on stage and giant balloons were falling from the ceiling, inspiring people to become a part of the show, while multi-colored lights touched upon the faces of the crowd.  Fan-favorite, “Believer,” was a sing-along at its finest and what I found amazing is that no one seemed a bit off-key – the thousands of people singing the chorus in unison was like makeshift choir.

My only complaint about this event was that it seemed too short.  I would love for them to have gone on a little longer, but I suppose it leaves the glory of anticipation for their next tour.

Review by Jennifer Russo and photos by Seth Shapiro