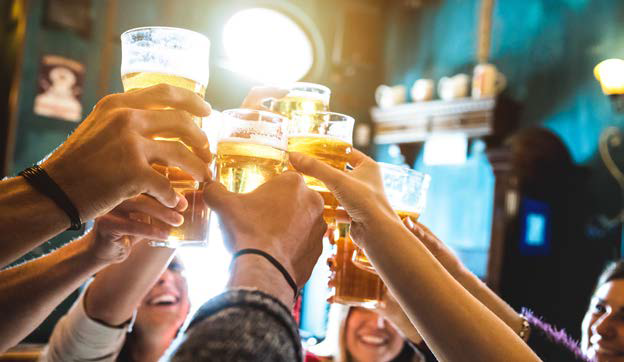 Are ya one, are ya two, are ya… three HUNDRED years old??
Worcester is older than steam engines or parachutes or soda. Older than raincoats or the
guillotine. Worcester is older even than American independence. WOW. And how do we
commemorate such an auspicious occasion? With a toast of course. Two of Worcester’s
favorite breweries – Redemption Rock Brewing Co. and Greater Good Imperial Brew Co. –
shared their plans to make this a memorable celebration.

Though Worcester is not older than beer, don’t let that get you down: Beer is almost as old as
humanity itself. (Worcester is also not older than the oldest living Greenland sharks, but that is
a story for another time, or a deep, deep rabbit hole to find yourself in when you’re on deadline
for a beer column.)

Beer is a particularly unique expression of place and time. “Terroir” if you’re feeling fancy.
“Beeroir” if you like made up words. Beer was integral to daily life at the time of Worcester’s
founding. In fact, it was such a critical source of hydration and nutrients that the Pilgrims did, in
fact, land in Plymouth because they ran out of beer. What we consider traditional today, “beer
flavored beer,” as some might call it, would be unfathomable to someone in 1722 Worcester.
As Dan Carlson from Redemption Rock Brewing explains, “In the 18th century, most beers were
brown, sour, and smoky – due to how malts were made and the sanitation technologies
available at the time.”

Maybe I watched Brendan Fraser in the seminal classic film, Blast from the Past, too many times
growing up, but I like to imagine a Yankee from the 1720s emerging from a cryogenically frozen
bunker and saddling up to the bar in one of Worcester’s taprooms, ready to order a tumbler of
ale. When I asked Carlson which of Redemption Rock’s beers would be most amusing to explain
to 1722 Brendan Fraser, he chose Three Decker, their Helles Lager. “A pale, clean, crisp beer
would be completely new to someone from 1722. In fact, pale lagers wouldn’t be created for
another 120 years, coming shortly after the invention of Pilsner malt. And Munich Helles Lagers
specifically wouldn’t be around for another 70 years after that.”

Over at Greater Good, J.T. Ethier delighted in the thought of offering our fictional friend their
limited-release Dry Irish Stout called 1722, or their 10% Imperial New England IPA, WOOO!! He
was also amused by the prospect of trying to explain Bigg Summer Imperial NEIPA. “Not only is
the New England IPA a huge departure stylistically from a traditional IPA, but we have loaded it
up with hundreds of pounds of pineapple, which would probably leave a brewer from 1722
scratching their head.”

While many of today’s most popular beer styles are younger than the city you call home, they
also represent the city’s incredible progress and innovative spirit. Worcester’s breweries are
crafting unique brews, raising funds and participating in the Tercentennial road race – go PULP
Daddies! – for the Tercentennial.

Greater Good will be featuring Preservation Worcester as part of their recently-launched
initiative, “Acts of Greater Good” that highlights a new local non-profit organization every
month. Thursdays are Acts of Greater Good Days, and in June customers can enjoy a beer and
help raise funds for the preservation of Worcester’s history, culture, and architecture.

Redemption Rock is partnering with the Worcester Historical Museum to brew three unique
beers to commemorate three important Worcester anniversaries throughout the year. This
includes a pre-Prohibition corn lager called Rescue From Oblivion celebrating Samuel Staples
200th birthday and his founding of the Worcester Society of Antiquity, now the Worcester
Historical Museum. An American Pale Wheat Ale triple-hopped with Centennial hops named,
Made In Worcester will specifically honor the Tercentennial. Carlson shares, “This beer will not
only celebrate Worcester’s industrial leadership and history of manufacturing, but the
resilience, character, strength, and diversity of its peoples throughout the centuries and today.”
While we can no longer claim that we need to rely on beer to further progress civilization, (or
can we?) we can support Worcester’s breweries and the many businesses, non-profits, and
people that make this city so great. I look forward to raising a glass to Woo at an upcoming
Tercentennial event. And I hope someday, at the city’s future Quincentennial, a woman from
the future will write about how Worcester is finally older than the oldest living Greenland
shark, and THRIVING. Let’s toast to that.