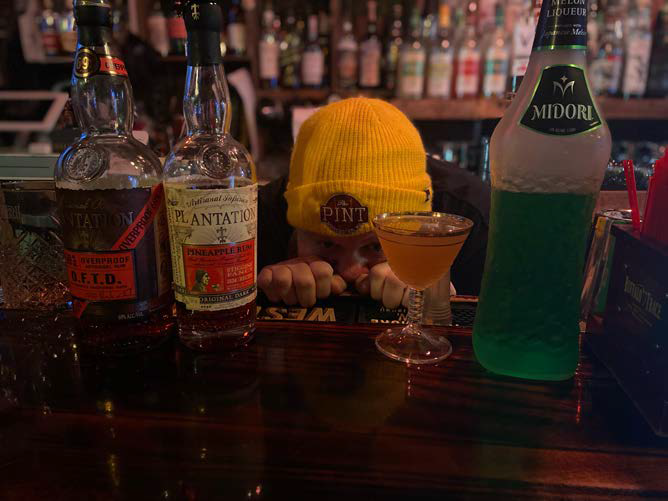 Derek Grimm wants you to know he is a “big fan of trashy 80s drinks”, including but certainly not limited to fuzzy navels and Alabama slamas. “I like taking really crappy drinks like that and making them better,” he explains.

“Daiquiris are a super simple drink, but there are endless possibilities to create your own variation,” he says, as he effortlessly mixes,“a riff on the extremely poorly named drink, the Pearl Harbor.” Grimm’s new take is Plantation Stiggin’s Fancy Pineapple Rum, Plantation O.F.T.D. Rum, Midori, lime, and sugar, and it’s amazing. Refreshing and fun, but also unpretentiously classy.

What’s Derek’s favorite part about being a bartender?  “It’s nice to not have to work a 9 to 5 in an office and talk to some guy named Dave about how my weekend was,” he tells me as I laugh. Derek’s not just bartending to avoid watercooler conversations though, he enjoys being creative and connecting with people while he’s behind the bar.

You can visit Derek at the Pint, Valentino’s, or when he feels the need to be creative, one of his pop-ups. “They’re loose and fun,” he says of his events, “they’re meant to showcase the artisan aspect and how different products can play different roles.” Treat yourself to an extremely improved trashy drink from the 80’s, unless your name is Dave and you’re curious about his weekend.