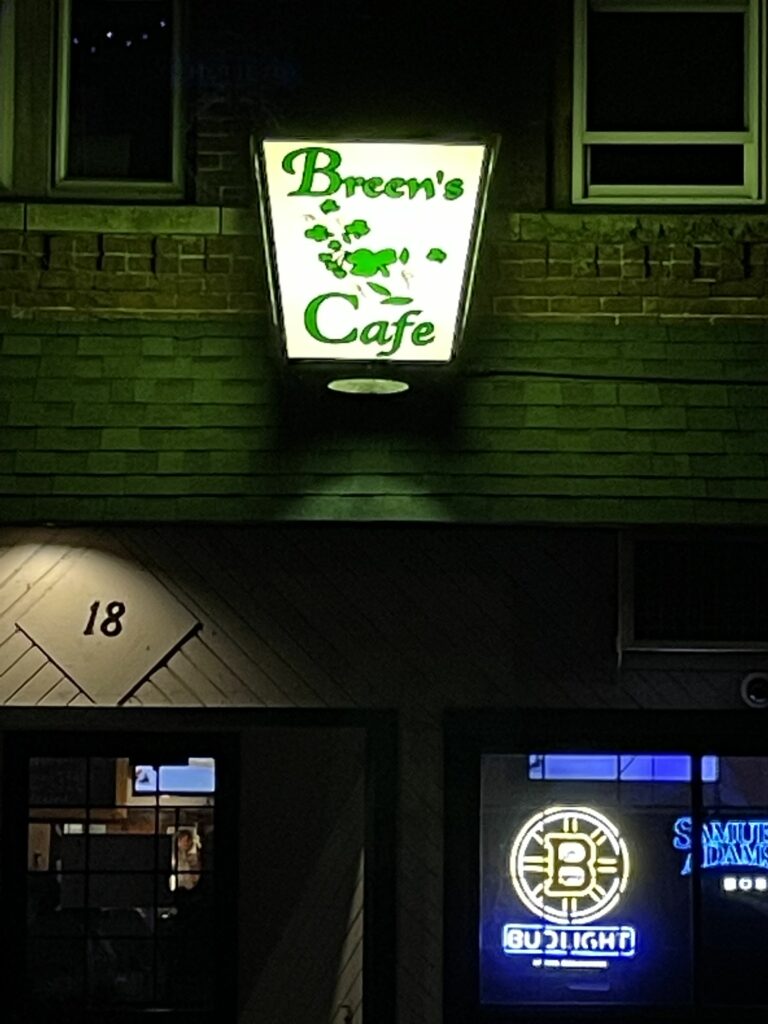 Talk about restaurants for more than a few minutes and the conversation usually devolves to “Who has the best?” Whether it’s the best pho or the best fish n chips or the best strawberry gelato; everybody has a passion and a fierce opinion. My friend, who avidly tracks these debates on Facebook, has been telling me about the buzz Breens Cafe has been stirring up with their steak and cheese sandwich.

I must acknowledge, steak and cheese is not a sandwich I’d travel too far out of my way for. But I’m aware of its cult-like popularity and, besides, I found the idea of checking out Breens to be compelling. Besides that, what could go wrong? Most chefs aren’t one-trick ponies; if they can make good steak and cheese, there must be plenty of other solid menu items.

Immediately on entry, Breens struck me as a full-bore old-style barroom, the kind of place I first encountered decades ago that would be fitted out with a jar of pickled eggs on the counter and populated with accomplished drinkers who look unfavorably upon amateurs.

In short, well into their eight decades of operation, Breens Cafe has a comfortable feel, like your favorite pair of faded Levi’s.

Also in that first glance, there was no food in sight. Then, after a deeper scan, I saw at the far end of the bar a grill-top and meal prep station. Across from it were open booths, so that’s where we headed. On noticing we were there to eat, the proprietor arose from her bar stool and brought menus.

After making our food decisions we walked over to the bar to place our order and get drinks. Then we sat back down to soak in some of the vibes and try not to look like the tourists we were. When the Bruins game started, people stood up to honor the national anthem.

Soon we heard the loud clatter-mc-clatter of metal spatula on a sizzling grill, a sound that could make a steak and cheese lover salivate.

Breens isn’t fast food, so in around twenty minutes the cook came to our table with our meals. My friend started with a cup of the day’s soup special, Hamburg Mushroom Noodle. As much as we wanted to love it, liking it proved a challenge. Pudding-thick and lukewarm were its operative adjectives. True, there were firm slices of mushroom and bits of hamburger meat seasoned unobtrusively.

My friend diagnosed the reason for the soup’s viscosity, reminiscing, “As my mother used to say, never cook the pasta in the broth!” As a result, the noodles had absorbed all the broth and dissolved right into the soup.

Undeterred, he moved to his steak and cheese. This thing was a monster! A fresh torpedo roll had been crammed-to-the-max with razor-thin sliced steak slathered on top with melted-in cheese. Cut in half and served with a bag of Utz chips and a crunchy pickle spear, each half was a handful that barely contained all that tender meat.

Breens’ steak and cheese sandwich lived up to its reputation in both flavor and size. My friend voraciously dug into it, savoring the tasty shaved steak and proclaiming it, by far, the best!

With such a reputation for sliced meat, I’d ordered one of my favorites, Breens’ Pastrami Sandwich. In this case, I regret that I missed the spices, coarse pepper, and zesty Jewish Deli flavor. Breens’ heap of sliced pastrami came packed into a pillow-soft bulky that I loved, but the flavor experience was encumbered by fat.

It’s said that a marbling of fat gives meat flavor. But too much of it becomes burdensome. Flavor relief came with my glass of Wormtown Brewery’s standby, Be Hoppy. This IPA continues to stand up to all challenges thrown before it.

Next time I’d try Breens hamburger… I hear it’s getting a lot of buzz.