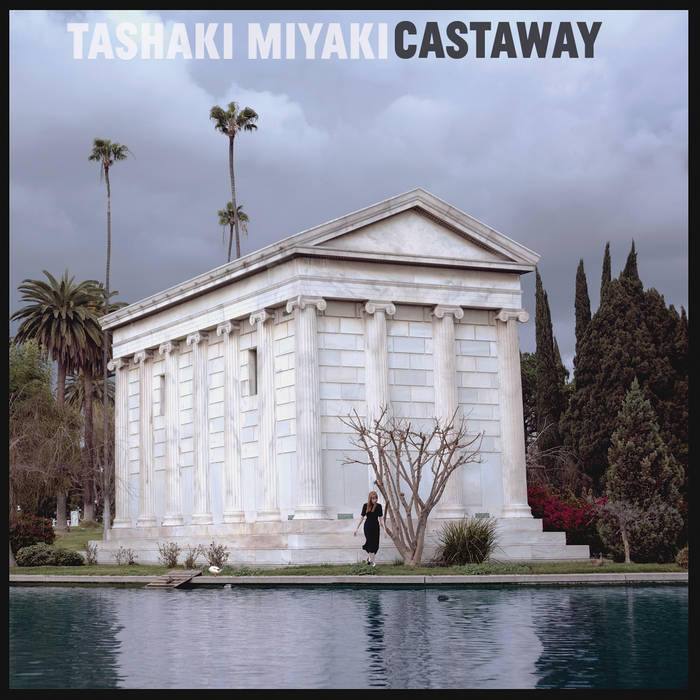 Hey, are you feeling stressed or like you’ve had enough? Try listening to Tashaki Miyaki’s sophomore album Castaway, an elevating dream-pop slumber that will help you escape to a different reality. Castaway is filled with atmospheric tunes tied together with catchy melodies and hooks that gently tug at your ears in the best way possible.

Based out of L.A., Tashaki Miyaki has some of those familiar laid-back west coast vibes, but the three piece-band is certainly much more than just a geographical sound. Singer/drummer Paige Stark’s enchanting voice, with her long, silky smooth emotional delivery–sometimes barely a whisper–is at the forefront, making lines like “You’re gonna miss me/I’m not coming back” in “Gone” feel all the more heartachingly real. Neatly placed guitar tremolo on top of acoustic strumming helps and lush synths add to the airy and spacious grooves in a lot of the songs here, especially in the mellow country twang of “Comedown.” A distorted guitar solo finds its way into the middle of the song, punctuating an innocent melody with a spark of envy.

Tashaki Miyaki flip their formula on its head a bit with “Baby Don’t.” Stark’s tone changes with a hint of malice laced into it, and when paired up with an underlying guitar drone that sounds just as menacing, you have a whole other animal. No longer does she sound welcoming and alluring; she now comes across as haunting and flat out up to no good when she sings “Baby don’t give up on me/It’s going to get better/Believe in me/I’m doing things you can’t see.” It just goes to show how a simple shift in tone and delivery can have a major impact on the way a band can sound from one track to the next. “Forget Me,” the album’s closer, is probably the best song here, incorporating all the ingredients used throughout the album to create one last memorable treat.

“Wasting Time” is the most upbeat number here in terms of its tempo and turns in melody. It’s not a bad thing, but it just sticks out from the rest of the album and feels a bit like it was thrown in for the sake of something different. This listener would have preferred a constant dreamscape of flourishing sounds from beginning to end to get lost in without being woken from what is otherwise a great escape.

If Castaway sounds moody, it’s because it is, but it’s not moody in a whiny way that will turn you off. Instead, it’s suave, it has character, and it fills the room with just the right amount of atmosphere that isn’t cold or alienating.