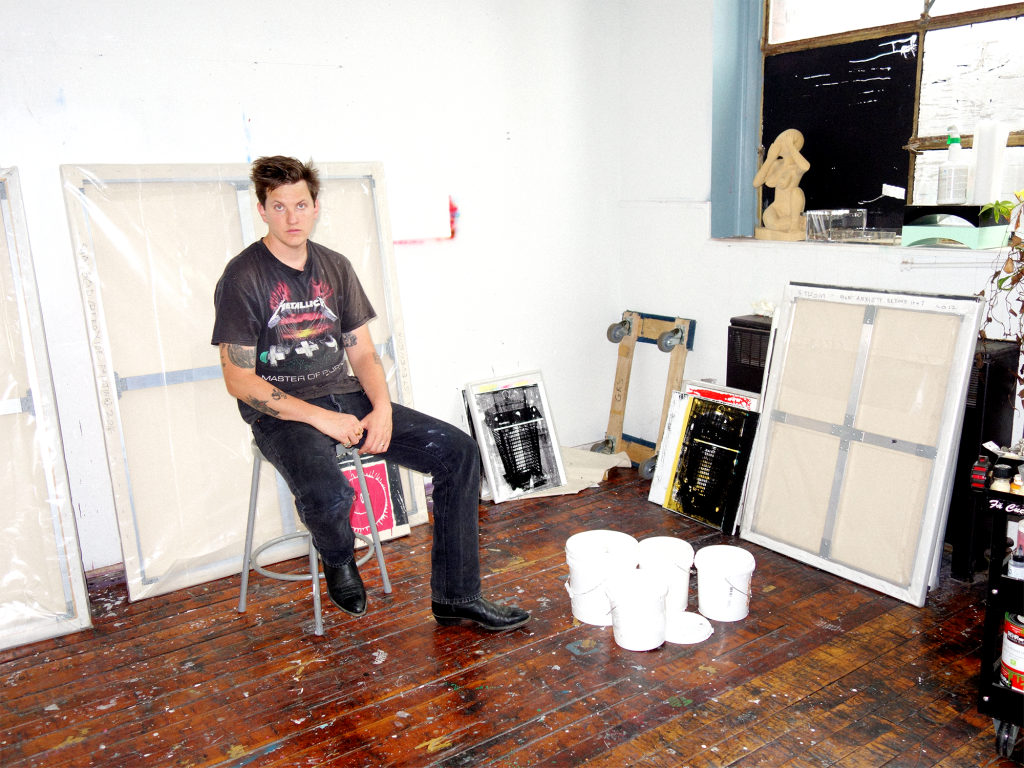 When you think of paradise, visions of palm trees and splashing in the sea may come to mind. For those in the know however, Paradise is an art lover’s dive into others’ unique perspectives of the world around them. Being surrounded by tangible visions of someone’s deepest thoughts, fears, and interpretations of beauty. An art gallery for the people. And this land of the art spectator’s nirvana resides within an old 19th century Baptist church located in nearby Sutton.

Let us back up. B. Thom Stevenson was a hyperactive child who had a difficult time sitting still…unless he was painting or drawing. Art was a means of focus for this otherwise rambunctious boy who would otherwise be using furniture as a playground or, as he shares with us, “flushing clean laundry down a toilet.” His family encouraged him to embrace his creativity (and in fact, his father later restored the previously mentioned church by hand for this gallery). Instead of taking notes in high school, he took what he calls “informed doodles,” which got him through to graduation.

Then came art school, where he could really excel and shine. He quickly found growth in translating his creative voice into something people could see and touch. When I asked him about how he determined his current art style, he shared that a lot of it was creative experimenting, and credits Kurt Vargo, a teacher he had at SCAD (Savannah College of Art & Design), for inspiring him with the idea that an artist’s style decides on them, not the other way around.

“I believe the search for one’s visual voice or aesthetic is what provides one with the tools to wield said voice when it smacks you in the face,” Stevenson shares. “That said, my current aesthetic came to me in a fever dream.”
And his aesthetic truly is something that inspires thought. In addition to creating original images, he will also repaint them, photocopy them and rework them into something that is both a version of itself and yet entirely different at the same time. He tells Pulse that this is based on the idea of the language of communication.

“The idea that the same 26 characters can be rearranged to form an alphabetical listing of every word in the English language with no emotion resonance, and then knock the wind out of you with just three letters. It’s the shortest words that carry the biggest ideas. I repaint the same images and rework them in an effort to simplify their forms and create my own type of visual alphabet. I paint and redraw these motifs the way a child learns their letters, through repetition,” he states.

The pandemic also had an influence on his subject matter, changing his own perspective of his art. As the art created in this time will, as it has throughout history, showcase content and interpretations of current events, Stevenson has owned this idea.

“I started viewing my work through the eyes of my future self. I realized for the first time since 9/11, that we are living in an immensely important time in the world…I keep thinking about the art history term “Post-War” and how the bleak period that was WWII birthed some of the most brilliant artworks of the modern world and how, someday there will be term to describe this period of art being made…I am pushing myself and my craft in hopes to be part of that future conversation,” he shares.

He tells us that his dream project would be creating multifunctional public art, art that serves a range of purposes and encourages public participation. Artwork that are also “structures where children can play, peddlers can peddle, picnickers can eat, skateboarders can do their thing and the weary can just sit and rest…where the human element acts as an extension of the work itself,” he says.

That evolution of conversation and community is also what inspired Paradise Gallery. Through his own art and the space, Stevenson’s hope is for the community to take part in that exchange of thought and communication.

“I exhibit a range of artists from local, emerging talent to internationally established artists. For most opening receptions the artist is present, and visitors are encouraged to view and interpret the works, ask questions, and expand their perspectives on what art is and what it can be. I hope Paradise Gallery can be a space for kids hoping to pursue a career in the arts to find encouragement and network with other creatives and strengthen the creative community of central Massachusetts,” he says.

Paradise Gallery is located at 439 Putnam Hill Road in Sutton and is open for art openings and by appointment. Stevenson announces openings on his personal Instagram account, @bthomstevenson and on the gallery account @A_gallery_Called_Paradise.