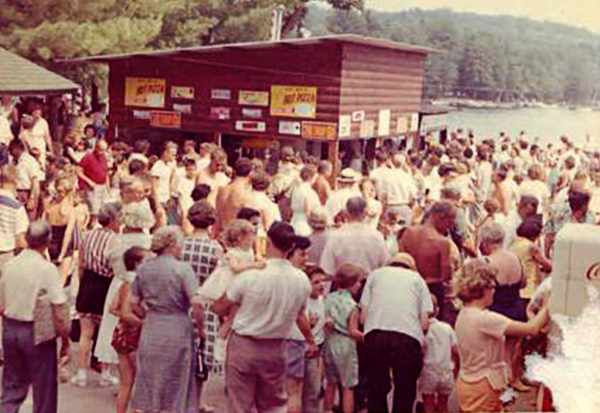 Indian Ranch, nestled on the shores of Lake Chargoggagoggmanchauggagoggchaubunagungamaugg, is celebrating 75 years as one of the most popular outdoor music venues in New England. Affectionately dubbed Nashville of the North for the variety of country music acts they first became known for hosting, Indian Ranch has curated a summer lineup larger than ever to celebrate such a momentous anniversary.

Indian Ranch has undoubtedly grown since it was founded in 1946, evolving alongside the landscape of music and live entertainment. Suzette Coppola, executive director at Indian Ranch since 2007, describes this as a natural process. As the performance space and campground grew, the decision to build Samuel Slater’s restaurant and introduce other forms of entertainment, such as Indian Princess, one of the few authentic paddlewheel boats still in use in the United States today, felt natural.  “Everything kind of blended together”, Coppola reflects, “one part of the business brought in another part of the business”. This sort of fluid growth and readiness to evolve has seen Indian Ranch through its 75th anniversary, and is now lauded as one of the oldest concert venues in the nation.

While it gained notoriety as a country music venue, seeing many up-and-coming country stars cross the Indian Ranch stage before their rise to fame (think Charlie Daniels, Blake Shelton, and Brad Paisley) the priorities of the business have shifted as the music industry has changed. As country music became more mainstream, Indian Ranch expanded to classic rock, pop, blues, and acoustic. For Coppola, it’s important to continue reaching new audiences. Some of the bigger acts they’ve brought include Andy Grammar and Gavin Degraw, building off of a commitment to continuously expand the variety of musicians they host and offer something for everyone. Indian Ranch’s number one priority, after all, is their audience: getting the artist onstage in a timely manner, moving the crowds through quickly, Coppola asserts “that’s where people are enjoying themselves.”

To celebrate their 75th season, Indian Ranch is arriving bigger and better than ever, with a loaded roster for mainstage concerts, music on the beach, and tons of specialty boat cruises. Tickets are currently available for the Indian Princess Margaritaville Cruise, featuring all your favorite Jimmy Buffet songs performed live by Auburn musician Tom Revane and tours around Webster Lake. Some exciting names coming to the Indian Ranch mainstage this summer include Foreigner, Grand Funk Railroad, Josh Turner, Melissa Etridge, Get The Led Out, Tower of Power, and Scotty McCreery. For a full list of acts, visit: Indianranch.com/concerts.

The Indian Ranch campgrounds are open for overnights, week-long stays, or the entire season, with 200 sites up for grabs. Indian Ranch’s facilities offer the perfect opportunities to get out of the city and into nature, with the luxuries of free Wi-Fi, lakeside dining, and your fill of live music.

If your August is already booked up, Indian Ranch is ringing out the summer with Hairfest and Countryfest, September festivals that highlight local classic rock tribute bands and original country music. It may sound like a jam-packed season, but Coppola is ready to welcome the crowds: “This is who we are.”