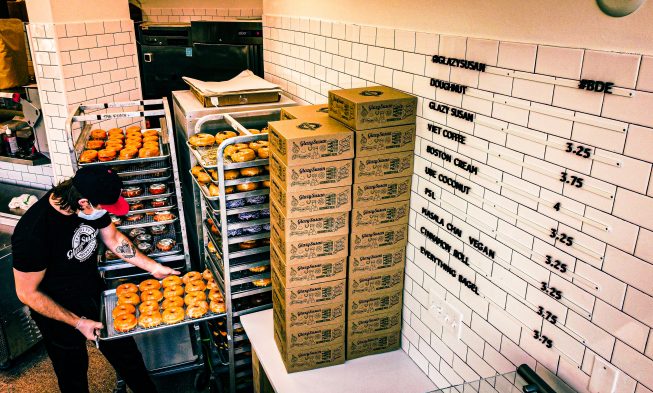 Back in the days when munchkins meant ‘little people’, the important discoveries of fried dough and powdered sugar came together on some country fairground to ignite a tasty tradition that has never stopped innovating. Add a hole! Coat with icing! Inject them with jelly! The modern donut was born.

Since then, the humble donut has been scientifically calibrated and mass-produced, sold from gas stations, and machine-fed at a terrifying rate into Homer Simpson. And now, across the nation, regions are locked in competition for the most leading-edge donut culture.

West Coast cities brag that they’re out front on the donut curve. But here in the Worcester area, home to a rich tradition of family donut shops, there’s a group of newcomers defying standard donut logic to give us the distinct edge.

To investigate, we tossed rational blood sugar concerns aside and set out on a binge tour of these pioneering donut shops to taste for ourselves how they’re

At each shop we would select three different donuts; one of which, the basic glazed, would serve as the control group; an anchor to the past.

Then, back in the tasting lab, we’d subject them all to a battery of taste tests and make scientific tasting notes.  Here are the results.

After waiting a half hour in line, I was finally admitted into the donut salesroom where Michael emphasized that Glazy Susan donuts are made from scratch, even the icings and glazes, using locally sourced ingredients such as Hebert’s chocolate.

I was early and, consequently, fortunate to find their shelves packed with fresh donuts and all varieties available. This complicated the decision-making process, but here’s what I selected:

Ube Coconut. Michael explained that ube is a purple yam used as a natural sweetener in confections and ice cream. This was news to me and challenged my bias against vividly colored donuts. The Ube is a bright purple cake donut covered with bits of shredded coconut, sweet and moist but not cloying. With each of my selections it became more evident that the Glazy Susan baker has a solid understanding of flavor balance; a knack that allowed the mild coconut flavor to transcend.

Boston Cream. This one really stood out; it’s a raised donut with a hole in the center, but the donut is filled. How do they do it? Where are the injection points? On close inspection I couldn’t find them anywhere on the donut’s surface, so I concluded they must be on top, obscured by the thick chocolate icing. Clever.

That Hebert’s deep chocolate flavor was thick and rich – but not fudgy… this was a classic raised donut with gobs of honest eggy custard in every chocolaty bite. If your last Boston cream pie was from a grocery store, do yourself a favor and grab some Glazy Susan Boston cream donuts.

Honey Glazed, aka the Glazy Susan.  A delicate thin glaze that fractures on touch is coated over an even-textured raised donut. Fried to a nice light golden brown, it was masterful. After sampling this gorgeous donut, I understand why they’d rest their name and reputation on it.

Our overall reaction to Glazy Susan: Three is not enough! We want more!

Rocco’s is located five minutes from the center of Millbury; once you get there, you’ll need to finagle a parking spot because all the neighbors have signs posted ‘No donut parking.’ I waited in a short line before being admitted. Once inside, I was advised that Rocco’s is so famous because the donuts are big, creatively conceived and baked from scratch with high quality ingredients.

Indeed! At Rocco’s, size does matter. These huge donuts provide ample real estate needed to top them with thematically devised companion confections. I took advantage of that with my selections:

Chocolate Raspberry Brownie. Start with a rich chocolate raised donut, crusty and dipped in a thin sugar glazing, then cloak it with thick fudgy frosting dabbed with mini fudge marshmallows. Add a generous drizzling of bright-flavored raspberry syrup and top it off with a ridiculously fudgy brownie triangle. This was a totally outrageous chocolate journey. Tart raspberry and chocolate: an inspired combination.

Basic Glazed. A fluffy raised donut quick-dipped in a glaze that shattered into crispy shards when I bit into it. Very airy texture. Can a donut be ethereal? Here’s a candidate.

Blueberry Maple Brunch. True blueberry bits were blended into a huge cake donut that had been dipped in a mild maple glaze and studded with chewy maple chunks. All this was topped by a classic Belgian waffle. The waffle itself was worthy of raves, straight from the boulevards of Brussels. You might be tempted to ladle it with warm maple syrup and a big dab of whipped cream.

Overall, Rocco’s glazes are nice and thin, their flavors are true (no sledgehammer of imitation maple flavor). And, happily, their donuts are very huge and perfect for sharing. We loved their well-conceived flavor combinations and felt an urge to make a return trip. Three Rocco’s donuts barely scratch the surface of their collection.

Doughnuts & Draughts is located in a corner of the Palladium building and has a few tables overlooking Main Street. While I waited, I overheard a couple customers enjoying coffee and registering gloomy alarm regarding some conspiracy theory.

The manager explained to me that D&D’s fame derived, simply, from the freshness of their donuts. I get that; with so many donuts sourced from the nearby gas station, freshness should be a cause for celebration.

Cinnamon Glazed. This was a respectable raised donut with a pudgy coating of sweet cinnamon caramel glaze. Careful how you hold it, though, I couldn’t wash that glazy aroma off my hands for the rest of the day.

Maple Bacon Glazed.  My favorite of the D&D bunch; the salty notes coming from crispy bacon shreds provided a welcome anti-sweet aftertaste. This donut shouldn’t be messed with by nibbling. Take a big bite and savor the combination of intense maple, crunchy bacon and fluffy raised donut.

All with that hint of salt finish. Hey, pass me an IPA!

Chocolate Frosted (billed as the best you’ll ever have!). I was ready for a frosted chocolate cake donut but, surprise!, discovered a regular white raised donut coated with a thick layer of  semi-sweet chocolate frosting and topped with rainbow sprinkles. The effect: fluffy gives way to deep choco intensity. Delicious! Wait… maybe this was my favorite.

Doughnuts & Draughts are very sweet donuts; the flavors of their coatings are robust and seem built to withstand the assault of a New England Double IPA.

Positioned behind her glass display case, Alicia explained to me that Doughnut Homies are made by hand in small lots and sell out fast. That explained the limited choice; had we arrived a few minutes later we may have departed empty-handed. Fortunately, there were still some interesting varieties remaining.

The chocolate flavor was deep and true and left a pleasing cocoa aftertaste.

DH’s Glazed Donut was the solid-citizen of the bunch; a springy-dense donut with thin coating of glaze. Ours was a bit squeezed on one side but still sticky-fresh.

Cream Filled. In general, I prefer donuts with holes but reluctantly selected this one and was really surprised! I loved the crusty exterior; deep brown around the sides with a nice crunch when you bite into it.   The center was filled with fluffy white cream that puffed out one side. Alicia had topped it with a raging blizzard of powdered sugar after boxing it for me. This made it messy, but fun to eat.

The Doughnut Homies experience reminded me of my youth, when the family would gather for Saturday Night Donut Dinner, right before watching hours of

My favorite donuts were the cream-filled; I never really knew what that fluffy white stuff was, but I still find it a guilty pleasure.