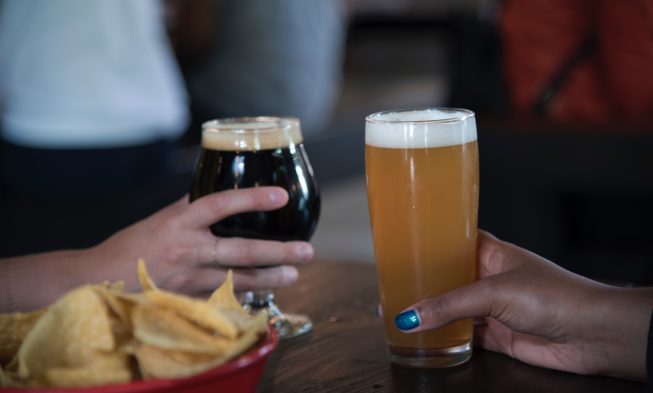 I kept my promise! The beer I’m writing about this month is produced at scale and can be purchased! You’re welcome!

So far this year, we’ve tasted New Decade IPA by Treehouse – an homage to a decade of IPA making – and the Balance Bike #3 Braggot by 3Cross – a modern spin on a medieval monk’s brew. The trend continues with the latest craft pilsner offered by Soul Purpose Brewing, Greater Goods’ younger, rather daring sibling. The beer in question is called 2d Wave Hoppy Pilsner and is as much an ode to traditional German brewing as it is to the IPA.

Imagine, for a moment, the flavor profile of the marriage of your favorite pilsner and your favorite IPA. I’ll wait …. are they married in your mind?

Excellent! That’s exactly what 2d Wave tastes like. It’s the perfect blend of malts and hops. Aromas abound when cracking open a can of this beer, though I don’t recommend doing it in the vicinity of week-old bananas. No need to explain, just don’t do it. The nose of this pilsner is unusually floral thanks to the Mandarina Bavaria hops Soul Purpose has brought over from Germany. The first sip starts silky and malty on the tongue, and is then followed by an ever-so-slight kick of more aggressive hops. It’s an easy drinking beer with some mild floral notes, but it’s mostly reminiscent of walking through a Bavarian wheat field while pretending to be Russell Crowe at the end of “Gladiator.” My wife tells me I need to stop sneaking film references into beer reviews, but it’s just too much fun!

2d Wave’s can is an indicator of the old/new theme I brought up at the column’s start. The artwork is cartoonish and depicts an interesting scene. City Hall rides a cresting wave that caps with images of the yet-to-be-built Polar Park and two stick figures in a canoe flying the Soul Purpose flag while Union Station glides above in a steampunk style airship. Are the figures in the canoe representative of Soul Purpose’s journey away from Greater Good and to their own brick-and-mortar operation set to open in the Canal District in 2021.

The image of Worcester landmarks, past, present, and future, riding the metaphoric wave off into the unknown yonder is more than appropriate. This city is indeed coming upon a second wave. Granted a controversial wave to some, but a wave nonetheless. It’s something I, and many commentators much more skillful than myself, have noticed. The American mill towns of yore are either returning to their industrial glory or transforming into something else entirely. Local pride is on the rise in the U.S. and more people are either staying, returning, or seeking opportunities in areas that were once depressed. Worcester is no exception.

And that’s what Soul Purpose is capturing here in their new hoppy pilsner: the future. And nothing is newer than the future.