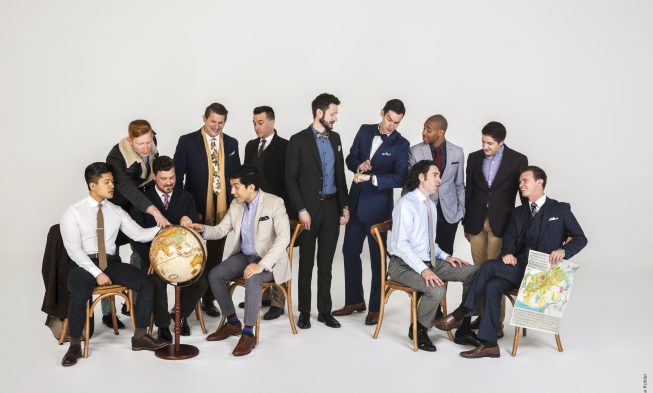 The Chanticleer Ensemble, one of the most well known acapella groups of the last 20 years, is making their way to Worcester. On Feb. 28th, 2020, the group will perform at Worcester’s iconic Mechanics Hall. The concert is a part of Music Worcester’s annual programming and concert series. The group will perform their setlist of “Trade Winds: Exotic Climes, Exotic Locations,” for a night that music lovers won’t want to miss.

Formed in 1978 in San Francisco, the Chanticleer Ensemble is comprised of 12 talented male vocalists from nine different states across the country. The group has sold over nine million records and won two Grammys. They have been called “the world’s reigning male chorus” by The New Yorker, and have received critical praise for their performances by other publications over the years. Their lineup has changed over the years, though they still always have a commitment to to performing top quality harmonies and musical performance. They regularly perform a wide variety of musical genres including covers of famous pop songs, classic music, jazz, gospel and more. Their upcoming show at Mechanics Hall will feature music from around the world, and will be a representation of different cultures and a wide variety of music.

Music Worcester is the organization responsible for bringing the Chanticleer Ensemble to Worcester. The organization leads the programming for the performing arts scene in the area. They sponsor both high profile worldwide music artists, artists from the United States and local artists as well. Adrien Finlay is the Executive Director who helps cultivate the experience that is Music Worcester. He booked the Chanticleer Ensemble for their upcoming performance.

“It actually took awhile, about three years to be able to book the Chanticleer Ensemble,” Finlay explained. “They are such a famous and high profile group, it was difficult to find a time that worked with their touring schedule, and a time that would work for one of our music venues here in Worcester. But it finally did and we’re really excited.”

Finley talked about how he thinks this will be a great addition to the already growing and prosperous music scene of Worcester, and how it is anticipated that it will attract a wide variety of an audience.“Since they are a very well known group, and already have a strong fanbase, we definitely predict that we’ll be getting a good amount of their fans from the New England area to come, as well as people who are dedicated Music Worcester patrons,” Finley said. “We also anticipate there will be choral and vocal groups that are a large part of the Worcester music scene in attendance. The great thing is that it’s going to create unity for the music community of Worcester. But we also think it’s going to attract more of a younger and mixed crowd than what our shows typically attract.”

Usually, Music Worcester sponsors more classical music shows such as the National Symphony Orchestra of Ukraine, or even classical dance shows like the Russian National Ballet. But Finley thinks that because the Chanticleer Ensemble will perform all different types of music, for all ages, it will increase audience diversity.

“There will hopefully be something for everyone with this show,” Finely said. “We hope to get children and families who might also enjoy this. Since there is such an acapella craze right now, we also hope to get some college and high school students who are also interested in acapella music.”

Finlay also feels that this will be a great promotion for the “Worcester Renaissance” that is occurring throughout the city at the moment. “When people see this show with the Chanticleer Ensemble, they are going to associate Music Worcester with high class and high profile performances,” Finley explained. “It is going to be apart of the ‘new Worcester’ experience. People will be able to go to one of our many great restaurants here in Worcester for food and drink, and then enjoy an evening of high class entertainment and music. It’s going to look great for not only Music Worcester, but for the city itself.”

All music lovers will definitely want to make their way to Mechanics Hall for the concert this month. It will be a night of high class music for all and a night to remember.

For more information, visit the Music Worcester website at musicworcester.org or additionally the Chanticleer Ensemble’s website at chanticleer.org.