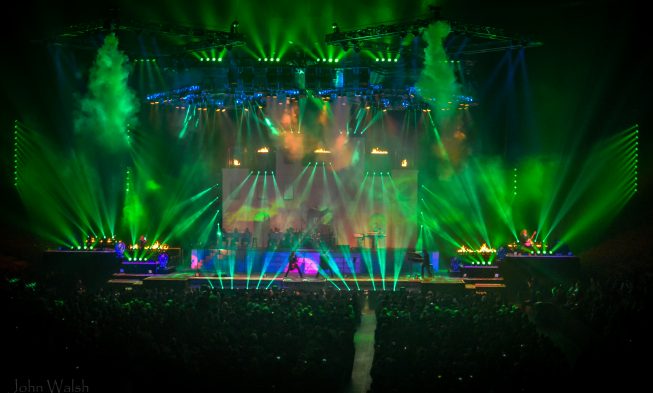 Formed by the late Paul O’Neill, the Trans Siberian Orchestra has played thousands of shows across the country to millions of fans over the years. The band is famous for its elaborate use of lights, lasers, and synchronized performances. Adam Lind, manager for TSO, spoke about O’Neill and the band, saying “Paul O’Neill always explained that the audience was the most important people in the arena and that he wanted them all to leave a show saying ‘not only was that ticket worth the money – for what we just saw I would have paid double!’” O’Neill’s attitude towards the live shows lead to great touring success for the Trans Siberian Orchestra. Over the years, they have played over 2,000 Winter Tour shows to millions of fans around the world.

The band was formed in 1996 by the music producer. While working within the music industry O’Neill was given the offer by Atlantic Records to form his own band. He accepted and used his 1980’s travels to Russia along the Trans-Siberian Railway as inspiration for the iconic name. He set out to create a band based upon the fusion of rock and classical music, bringing along members of the progressive metal outfit Savatage. Inspired by the impressive laser shows of bands like Pink Floyd, the Trans Siberian Orchestra became well known for their ambitious live performances and incredible sense of showmanship. O’Neill would often brag that his band spent more on pyrotechnics than any other band in the world.

The band has continued touring since Paul O’Neill’s death in 2017. “Paul was such an incredible person and built a team of people around him that had worked with him for decades, it still seems like he is here guiding us all. So while it is very sad and we all miss him terribly, the O’Neill family does such a great job leading the tour and fulfilling Paul’s dreams that it is almost like he is still here.” This year, the band has booked 109 shows in arenas throughout the United States with an all-new performance of their debut classic Christmas Eve and Other Stories.

Released in 1996, Christmas Eve and Other Stories was the debut album for the Trans Siberian Orchestra. The album follows the story of an angel who descends from heaven on Christmas Eve to discover an example of the true meaning of Christmas. On his flight, he becomes enthralled by the Christmas songs he starts to hear and begins to think that this music is what best represents Christmas. He continues his flight through Russia, and then into the war-torn Sarajevo. The tragic history of the Serbian city served as the inspiration for the album’s hit single and one of the best selling Christmas songs of all time, “Christmas Eve/Sarajevo 12/24”. The album went on to sell over three million copies and become certified triple platinum.

Although the Winter tour ends on December 30th, the Trans Siberian Orchestra train continues to move forward. “We have a lot of work to do,” Lind says of TSO’s future plans. “Paul has so many things written that haven’t been produced and we want to get them all out!”

The DCU Center was included on the tour because of its “long and famous history as a hub of rock music in the Northeast which is always exciting for the band,” Lind explained. “Also, Sandy Dunn the GM of the DCU Center is amazing and has always been a huge supporter of the band.”

The Trans Siberian Orchestra is prepared to play a show for the Worcester audience unlike any before, featuring a set full of fan favorites and all the classics that lead to their chart-topping success. Ticket prices to the 3 p.m. and 8 p.m. show start at $46 and $56, respectively, and can be purchased online at the DCU Center website. Don’t miss out, ticket prices will increase over time, and given the band’s track record of smash hits at the box office, the show has a good chance of selling out. If you want a seat for you and your family, do not hesitate to reserve your tickets to the best show of the holiday season!