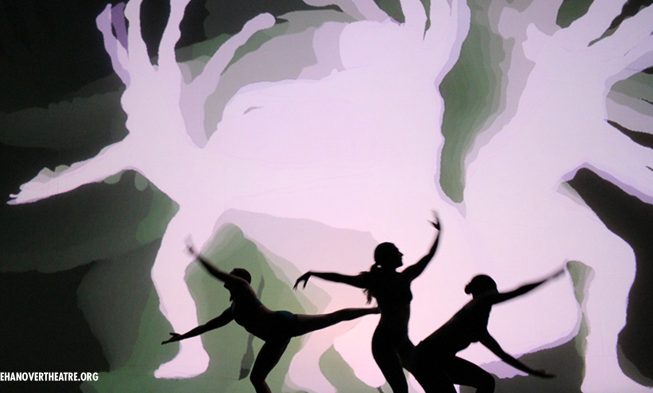 You may have seen the shadow illusion group, Catapult, on America’s Got Talent, but now you have the opportunity to see them before your very eyes at the Hanover Theatre on September 20th. They have recently developed a new performance dubbed Mouzart about a fictional musical mouse that lives within the house of the prodigy Mozart and his similarly prodigious sister. The mouse is also a musical prodigy and the performance tells the story of the three musicians using shadow, illusion, and a little bit of magic.

The owner and founder of Catapult Entertainment, Adam Battelstein, spoke about his upcoming show. The performance is referred to as a “shadow illusion”. Battelstein explained, “Bodies, dancers, move through space, and they form into shapes behind a screen, and the process of doing that is like a magic trick. You see these dancers moving and suddenly they’re an elephant or a car, a building or flower and the way that comes together is kind of like a stage illusion. We show you everything, but you still can’t figure out how it happened.” It is similar to that of shadow puppets but with many dancers coming together to form impressive representations to tell an engaging story.

Having worked for the famous dance company Pilobolus for 20 years, Battelstein parted ways and formed Catapult Entertainment in 2009 as a corporate entertainment company. “We did a lot of corporate work for big companies, pharmaceuticals, tire companies, everything,” he said. Then in 2013, he received a call from America’s Got Talent, inviting Catapult to be on season eight of the show. “Before America’s Got Talent, I was creating stuff for clients. So they were telling me what they wanted and I would make it, and when America’s Got Talent called me, I said, well, what do you want? And they were like, you can do whatever you want. And I was like, really? I can do whatever I want?”

Equipped with a newfound sense of creative freedom, Battelstein decided to do a spoof of spy genre movies, telling a story about a housewife who secretly worked as a spy. He crafted a coming of age story about a young girl, a story about a man being swallowed up by a whale, and another about a little kid standing up to his bullies. “I really go wherever my imagination directs me,” he said.

The group did very well, wooing the judges and America, and eventually made it all the way to the finals. Then, the group began touring all over the world. “We started touring in Europe, the Middle East. We’ve been to China, we’ve been all over and we started touring in America about two years ago, and it’s been great. American audiences are super friendly and they love the show.”

While on one of Catapult’s European tours, Battelstein hired many great dancers for his performances. He said, “We had double bookings in Germany and Italy, so we had two tours at the same time and we had to hire extra dancers. I was already there and decided to have some auditions in Italy and found some amazing dancers.” This left Catapult with a mixed cast, with some dancers from Germany, some from the U.S. and some from Italy.

Come September, Battelstein and his company will be performing their regular show, Magic Shadows, along with the newly developed performance, Mouzart, here in Worcester at the Hanover Theatre. The show will be on September 20th on a Friday night at a price of $22 through $28 depending on the seat. The touring will continue for Catapult up until Spring 2020, in which they will have a three week sit-down in the New Victory Theater, a Broadway house, which will then culminate in a performance in the theater. “That’ll be our first time on Broadway,” Battelstein said.

Having captivated the likes of Howard Stern, Heidi Klum, and America at large it is safe to say that a Friday night out to the theatre to see Catapult’s show would be a remarkable treat. Worcester has never seen a show quite like this one done by such a renowned international shadow illusion group. Mouzart and Magic Shadows will be a unique and unforgettable experience like you have never seen before.