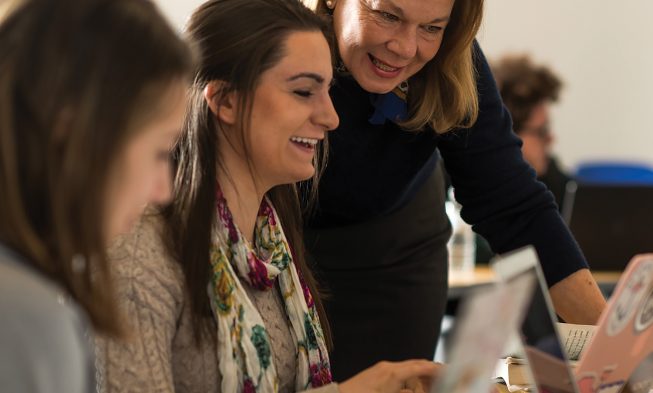 The second-largest city in New England and home to nine colleges and universities with 35,000 college students, Worcester is a city on the rise, filled with opportunity. In addition to its burgeoning technology and medical industries, Worcester’s diverse restaurants, nightlife, parks and easily accessed transportation has attracted more and more young professionals to live and work in the city after graduation.

In recent years, there have been plenty of reasons for graduates to stick around. Organizations such as StartUp Worcester and Action! Worcester give young entrepreneurs opportunities by providing grants, business networks and the resources they need in order to begin their road to success.

Cody Lavallee and Avyay Chaganty chose Worcester to call home and establish their marketing business, ACCL Marketing, after graduating from Becker this spring. Lavallee, a Rhode Island native, and Chaganty, of New Jersey, decided to stay in Worcester after building their network during their undergraduate years.

Lavallee and Chaganty believe Worcester is on the rise to become “a major business and tech hub” and are eager to be a part of it.

“This city is rapidly changing for the better, and by staying, you will be a part of that growth,” Lavallee said.

Katelin Riley, a 2018 Assumption College graduate who currently works for The Bridge of Central Massachusetts, said her job has helped her to appreciate the city more than ever.

“Working in Worcester was the best thing that I could have done,” she said. “There are so many opportunities for every different career and major. You may not find your dream job right of the bat, but you’ll find the stepping stone that you need to catapult yourself into where you want to be.”

Erin Thayer, a New Hampshire native who graduated from Clark University in 2014, works for Quest Diagnostics in Marlborough and lives in Worcester because the “amount of development and opportunities in Worcester are increasing, making [it] into a better city.”

Thayer believes the plentiful nightlife attracts many young adults to the city. Areas like Shrewsbury Street, with an eclectic selection of dining options, and Worcester’s expanding organic, vegan and plant-based restaurants are bolstering its appeal.

Abigail Godon, a 2018 Assumption graduate who lives in and works in Worcester, finds the restaurant scene a highlight. “There are so many great places to eat. I get really excited when I take my friends and family from back home out to eat here,” the Springfield native said, adding that one of her favorite things is to frequent one of Worcester’s many diners. “There are so many great family-owned spots, and it is clear to see that these diners have deep roots in the history of Worcester right when you walk in.”

Aside from Worcester’s award-winning restaurants, there are a variety of entertainment options. From The Hanover Theatre and DCU Center to the number of semi-professional sports teams that call Worcester home, residents have access to quality experiences without the hassle of driving into Boston.

Lauren Neilan, a 2015 Assumption graduate, currently works as the sports information director at Clark University. She explained that the affordable living, the convenient location, variety of nightlife and various networking and job opportunities make the city a perfect place to call home.

As a student, Neilan interned for Assumption’s athletic department, which she credited for helping her get to where she is today. “I love that there are so many other colleges in Worcester. We all work together, and the networking opportunities are endless,” she said. I also love that a good amount of my fellow [Assumption graduates] stayed in the Worcester area. As a young professional, it’s nice to have a group of familiar faces around a big city!”

Fellow graduate Greyhound Godon, who works for BCI, Inc. — an organization she came to know while a student at Assumption — said one of the reasons she stayed in Worcester was because she could work full time while getting her master’s degree at one of the city’s many colleges.

“I love that it is a city I continue to learn about. Worcester and its people have so much to offer. Everywhere I go, I meet new people, have new experiences and learn,” Godon said. “The Worcester community has something to offer to everybody, whether it be young professionals, families, etc.”