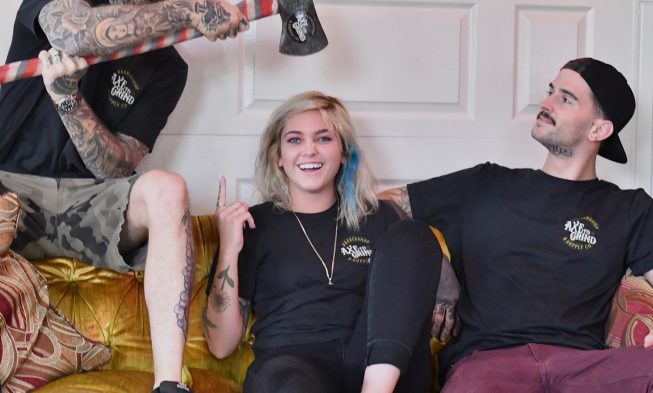 Justin Pitz, owner of Axe to Grind barbershop, had “no credit and really no means to open” when he took over the space on Shrewsbury Street. Owning a barbershop was always a dream, and it took family and friends pitching in to make that dream a reality for Pitz. Whether it was donating a neon sign or painting the walls, this was not a solo endeavor.

At Axe to Grind, Pitz wants to evoke the feel of a traditional barbershop. “We are trying to bring something new to the city that wasn’t here before – where people can come in and talk to each other and not sit and look at their phones.”

Pitz has studied the history of barbershops and has opened a shop that merges that tradition and history with modern style, creating a community of his own where friendships are formed and everyone can get a good haircut.

Pitz is looking to create “that camaraderie like how it was in the past, when barbershops were respected places where everyone from the community would come and check in with each other.”

So far, this approach is working. Since its opening just a few months ago, Pitz said he “can’t close the doors.” Customers have already become regulars, and a community is being created.

One factor that Pitz said contributes to his success is the location of the barbershop. He “couldn’t have asked for a better location. The whole community on (Shrewsbury) Street is so tight-knit and just looking to help each other out.”

Axe to Grind is still a new shop, but Pitz said he wants people to keep wondering, “What’s he gonna do next?” That means bringing new ideas to his traditional barbershop.

Pitz, along with his videographer and manager, is in the “very early stages” of raising money to send two shipping containers filled with barbershop supplies to South Africa. He then plans to fly to South Africa and teach people in poor areas how to cut hair. Pitz said he wants to make a lasting impact by teaching others his passion and giving them a way to support their families.

“Everybody needs haircuts,” he said

Axe to Grind is also hoping to host a new customer base as students return to college. The schools in the area mean a lot to Pitz, as a program at Clark University helped Pitz write his business model. He hopes to see many college students coming through his doors during their four years in Worcester.

“This is the type of place that college kids are going to like…We have cool music playing; we have skate videos on TV; we have cool decorations.” Pitz is focused on the environment of his shop and has cultivated a community atmosphere for customers of all ages. According to Pitz, not only are the barbers talented and experienced, but the friendly feeling will turn everyone into a regular customer.

According to Pitz, the focus at Axe to Grind is on quality. He is experienced in cutting hair for children, customers with autism and others. Pitz said, in his opinion, it is definitely worth it to spend a little more in order to get a really good haircut at Axe to Grind.