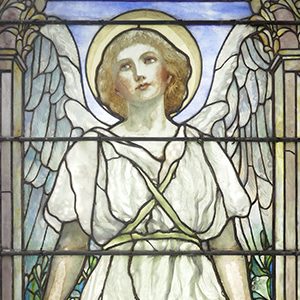 For more than 40 years, stained glass work by Louis C. Tiffany and John La Farge held by the Worcester Art Museum (WAM) have not been viewed. Originally commissioned for Boston’s Mount Vernon Congregational Church in the late 1890s, the large stained glass works were donated to WAM in 1975, when the church vacated it’s building, later saving the pieces from subsequent ruin caused by a fire to the church in 1978.

This summer, starting June 30, WAM will host Radiance Rediscovered: Stained Glass by Tiffany and La Farge, featuring windows by Tiffany, installed in the Contemporary Gallery. In late September, the panels by La Farge, which require additional restoration, will go on display in the same space as the Tiffany windows. This exhibition is the first of three pre-contemporary American art projects supported by major funding from the Henry Luce Foundation.

Titled Angel of Resurrection (1899; 90 x 37 inches), the Tiffany windows show an angelic figure among a field of lilies. Titled The Pool at Bethesda (1898; 133 3/8 x 31 7/8 inches), the La Farge panels portray a scene from the New Testament, in which an angel of God stirs the healing waters of the pool at Bethesda.

So new audiences can experience the vibrancy and intricacies of their designs, both sets of panels are undergoing continuous conservation work. When donated, the panels were covered in decades of muck; damage from the harsh Boston winters was visible, as well as wear from prior repair attempts in the 1960s.

As part of the exhibition, WAM will also feature other works that highlight the artists’ creative visions and techniques, as well as their aesthetic influences, from works on paper and paintings to Favrile glass.

For more information about the exhibition and the Worcester Art Museum, visit worcesterart.org