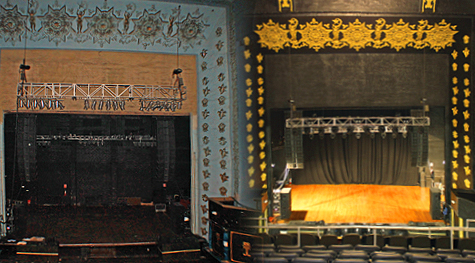 A few weeks back, I had a chance to walk through the newly renovated Palladium concert hall in downtown Worcester with General Manager Chris Besaw and Tony Scavone, and I was pleasantly shocked at the renovation work that had been achieved. Seats replaced, original craftsmanship from the 1920s refurbished, new paint and carpets; you name it, it has been done! Having another refurbished music venue in the city is a big plus for attracting performers and audiences alike, and seeing the venue in a new light was exciting and nostalgic all at once. I started remembering all of the concerts I had seen throughout the years and realized how important it is to keep this concert hall vital for Central Mass. concert audiences. Here is a little history on the storied concert hall.

The Palladium was designed by architect Arlan W. Johnson and opened as the Plymouth Theater in 1928. It was renamed the E.M. Loew’s Center for the Performing Arts on April 14, 1980. MassConcerts has owned the business since 2000 and purchased the property in 2012 from Jack Fisher and John Sousa. This year, Cliff Rucker has invested inå the business, becoming partners with MassConcerts owner John Peters; together, they decided to renovate the venue.

I asked Besaw and the management about the renovation and where things are going from here.

Question: Tell me about renovations and what has been done.
Answer: The Palladium has had a complete interior restoration/renovation. Here is a list of the work that has been done: New paint throughout, new bathrooms, new bars, carpets, both stages have been refinished, sound and lighting upgrades, new merchandise sales area, all new balcony seating, new VIP areas and furniture. Brand new A/C and heating upgrades; the dressing rooms have also been completely refinished. Exterior renovations include a new digital marquee and restoration of the original marquee structure, a new roof and masonry repair. Plans for a Phase 2 will include new windows and restoration of original brickwork.

Q: Why the renovations? Why now?
A: The Palladium had been long overdue for the upgrades. The partnership with Cliff Rucker allowed the renovations to take place now. Cliff has invested heavily in Worcester’s future, and the synergy he is creating between the Railers hockey team, The Railers Tavern and The Palladium will help revitalize Worcester’s downtown district.

Q: What is planned for the space, and will there be changes in the types of music and performers who play there or the types of events that happen there?
A: We plan on expanding the genre of music we are cåurrently booking. We will still book the metal and harder edge music we are known for, but also bring in other genres like country, jam bands, EDM, R&B, hip hop, classic rock, as well as boxing and comedy shows.

Q: What does the future look like for The Palladium?

A: We look forward to a long future of bringing great music and entertainment to Worcester and to being at the forefront of the downtown revitalization.

October will  bring a host of great shows and events, including the 11th annual Rock & Shock – the only event of its kind in the Northeast. The convention features musicians, horror movie actors, film directors and make-up artists. Attendees will have the opportunity to take pictures with featured guests and purchase photographed items. The event is 11 a.m.-5 p.m. Oct. 13, 11 a.m.-9 p.m. Oct. 14, and 11 a.m.-5 p.m. Oct. 15 at The Palladium, 271 Main St., and DCU Center, 50 Foster St., Worcester. For pricing and more information, visit rockandshock.com. Also in October, Ministry will come to The Palladium on Friday, Oct. 13, and Insane Clown Posse, Gwar and a rare visit from Yngwie Malmsteen are just a few of the other acts filling out the month.