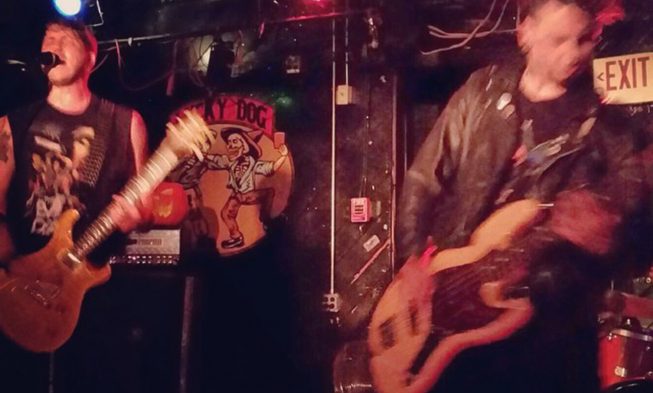 Damnation, a local punk rock band with a new album coming next month, was formed by chance, common interest and history. Brad Touchette (bass) tattooed Benny Austin (drums), and the two kicked around the idea of starting a band. This interested Benny’s friend of 15 years, Isaac Aldrich (guitar/lead vocals), and the trio started hanging out Monday nights and playing covers of old Misfits songs. It was then that the three came to the unanimous decision to write original songs.

“I can write a whole album right now,” Aldrich remembered saying. That was the summer of 2013. By March of 2014, Damnation found themselves playing their first live show at Ralph’s Diner in Worcester.

The band’s shared love of horror movies influences the music and the atmosphere of their shows. Horror images are projected behind the drums, in low, murky light, as the band plays.

“There’s something about the combination of the sound and imagery,” Touchette said.

“We like candelabras and pumpkins,” Austin said. “Halloween is our favorite.”

But the guys agree: They’re not a gore or a shock-rock band.

The release of their new album, After Midnight, marks a musical transition for the band, as they explore different avenues of punk rock instead of sticking with the same, heavy format.

“Being in the genre, people try to pigeonhole us, but we want to say to them it’s not just three chords and screaming,” Aldrich said.

Among some of the genres listed as influence for this new album are jazz, reggae, pop classic rock and new wave.

“There’s some country in there, too,” Aldrich said.

“We listen to everything, and that influences us,” said Austin. “I love pop. I listen to Lady Gaga as a warm up. I think she’s awesome. And I love the old stuff, like Max Roach and Louis Prima.”

“At its core, it’s still punk,” Touchette said. And punk has a following. Damnation, as of 2017, has travelled to perform in every state in New England (except Vermont), New Jersey and chunks of the mid-Atlantic. The band, with the assistance of tour manager Harley Sutherland, will tour After Midnight beginning in November.

“We’re working on dates in Maine, New York, New Jersey, D.C., and Baltimore. We’re hoping to get a little further south into Virginia, too,” said Touchette. The tour will consist of weekenders in all the aforementioned states.

For starters, Damnation is throwing an album release party. After Midnight is being released on March 31, with a party at Koto in Salem.

“We’d love to be able to have more people come and see us. Let me just say that Damnation … we’re nice boys and you should come see us,” Austin said, with a wide smile behind his thick beard. The others, bearded themselves, laugh and agree.

Independent music is gaining more of a following, which is good news for bands like Damnation, which are working on applying a different spin to the music they know and love. Many small bands focus on covers and try to impersonate the bands they’re covering. Damnation does the opposite. They use those influences as inspiration to create unique, original work that pays homage to punk and all the other genres they love.

“It’s really about breaking conventions and stereotypes,” Touchette said. “People hear punk and horror, and it paints a picture in their minds. We want to build off that and open people up to something they didn’t think they’d like.”